In one of the wilder starts to a postseason in recent years, we saw several upsets few if any of us saw coming, but the Golden State Warriors dropping a game to the Los Angeles Clippers at home -- possibly losing DeMarcus Cousins for the remainder of the season to boot -- was likely foreseen by no one.

Cousins, who appears to have some sort of leg injury, perhaps a torn quad, a nasty, painful injury that can linger if not addressed aggressively (just ask Kawhi Leonard), may not play again with the reigning champions, and could lose out big when he's up for another deal at the end of the season, too. 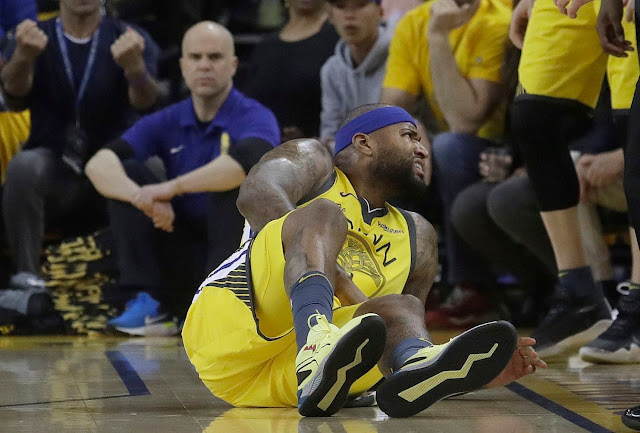 Having taken a huge pay cut to join the Dubs after rupturing his Achilles this summer, DeMarcus defied the odds and became a useful, even valuable player for Golden State despite the concerns about whether he'd return to previous form.

While he was certainly not in the best shape of his career after resting most of this season, he looked poised to bounce back as a starter if not star player, giving the Warriors a new tool to deploy against would-be contenders. Now, while they may not be in any real danger from the Clips, they look as vulnerable as they have at any time since transforming into a seemingly-unstoppable contender.

DMC may come back yet again to prove the doubters wrong, and the Warriors may yet win it all, but if nothing else, the bad luck serves to show just how much things like the health of a behemoth or the career of a star can turn on a dime -- best wishes to DeMarcus' recovery from those of us at CelticsLife...

...but we hope the Dubs go down in the finals against, well, you know, just the same.