The Boston Celtics ultimately fell to the Orlando Magic 116-108 after their fourth quarter comeback attempt fell just short. The loss was, in the end, inconsequential, but the injuries to Jayson Tatum and Marcus Smart are the story coming out of Sunday night. Lets hope they are minor and won't effect their ability to play in the opening round of the playoffs. 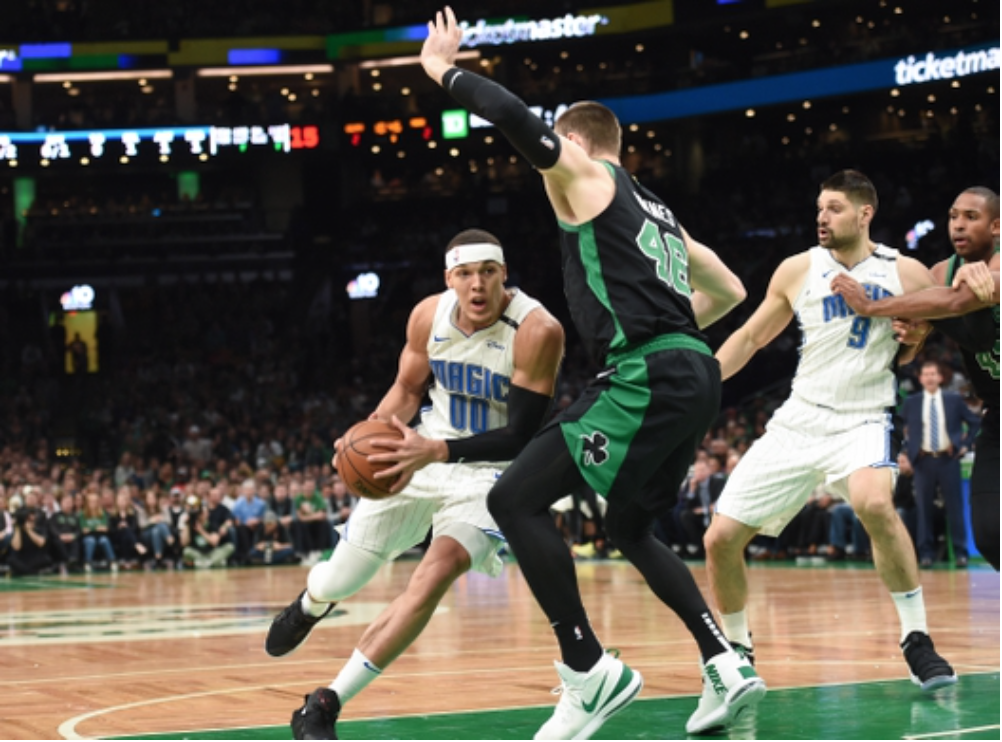 Even before the game started, the Celtics received two pieces of great news. First off, the Indiana Pacers lost to the Brooklyn Nets, which allowed Boston to clinch the four seed in the playoffs and home court advantage in the opening round before they had even tipped off. Secondly, both Jaylen Brown and Terry Rozier would be available to play, meaning the Celtics were at full strength heading into their final two regular season games.

Jaylen Brown and Rozier are both available

Early on, the game basically boiled down to Al Horford and Kyrie Irving vs. Nikola Vucevic. Vucevic scored eight of Orlando's first 12 points, and Horford/Kyrie combined to score Boston's first 13 points. Horford was taking advantage of being matched up against smaller defenders in the post, and Vucevic was burying all sorts of flip shots from the midrange.

A very concerning update from early in the first quarter:

Tatum just came up limping and immediately requested to be taken out of the game. He's heading back to the locker room.

The Magic went on a quick 8-0 run, including five more points from Vucevic, and opened up a 5-point lead late in the first quarter. Shortly after the Orlando run, the news came out that Jayson Tatum wouldn't be returning to the game due to a left shin contusion. The Celtics would need an excellent effort from their depth to overcome the in-game loss of Tatum and the hot shooting of Vucevic.

Gordon Hayward continued his impressive play early against the Magic. Hayward, through the 10-minute mark in the second quarter, had made his last 15 consecutive shots. If he can continue to play with this efficiency and become a lethal sixth man, both scoring and facilitating, the Celtics will be a tough out in the playoffs.

Hayward drops it in with the soft touch! pic.twitter.com/RKqBQFNs7g

Hayward, along with Rozier and Daniel Theis off the bench, helped Boston put some distance between them and the Magic. The Celtics opened the second quarter on a 14-5 run that resulted in a 9-point lead. Even when Vucevic returned to the game and continued to give the Celtics fits, Boston was able to maintain their lead thanks in large part to the shot making of Brown, Hayward, and Irving. The C's depth was on full display in the first half tonight.

For a majority of the first half, excluding the last few minutes of the second quarter, the Celtics were playing an incredibly enjoyable brand of basketball, something that hasn't always been the case this season. As a Boston fan, and just a basketball fan in general, seeing everyone playing well together, especially Hayward, just makes this team more fun to watch.

With Tatum out for the rest of the game, Hayward joined the starting unit to open the third quarter. Orlando came out of the gates on an 8-2 run and took back a 2-point lead. A big reason for the turnaround from the Magic was their outside shooting. Orlando knocked down four threes in the first five minutes of the second half.

With the Magic storming back and Tatum already in the locker room with an injury, Smart went down in some serious pain and grabbing his left side. With this game meaning absolutely nothing in the grand scheme of things, this is not what the Celtics wanted to happen just days before the start of the playoffs.

Now Smart is down and waving over help. He looks to be in a whole lot of pain. Limps off the court and headed toward the locker room. Have no idea why the Celtics kept playing him after he first got hurt.

A 9-point turnaround left the Celtics down five heading into the fourth quarter. The Celtics announced that Smart would not return to the game, calling his injury a left hip contusion.

Terrance Ross caught fire in the third quarter and carried that over to the fourth. He scored nine points in the first two minutes of the quarter, including two threes after he had heated up. Seemingly in the blink of an eye, the Magic were leading by 14 points. The Celtics struggled to cut into the lead at first, as the Magic answered every point that they scored, but then a Kyrie jumper and back-to-back threes from Brown cut the lead from 14 down to just six.

With the Celtics making a push, Adrian Wojnarowski gave a more in-depth update on Smart's injury:

A newly invigorated Kyrie put on his superstar hat and led the Celtics' comeback attempt to tie the game 106-106. Boston was doing everything right, making shots, making the extra pass, and playing some aggressive defense, especially Theis on Vucevic, who had two incredible blocks down the stretch.

But as it so commonly goes when making a huge comeback, especially being undermanned, the Celtics just didn't have enough to get over the hump and take the lead. Aaron Gordon and Evan Fournier made some late layups/free throws and that sealed the win for Orlando.