With 20 games to go, the East seeding race is heating up


The Boston Celtics are, for better or worse, locked into the three to five range for playoff seeding, and the matchups might just matter more than they ever have for a team on the precipice of both massive failure and huge success both.

If this team plays to their potential, they can hang with every team in the league -- and have done so, too. But they can seemingly lose to the lowliest of squads, and the schizophrenic nature of this team's identity very well could leave us in the "massive failure" category depending on their postseason matchups. 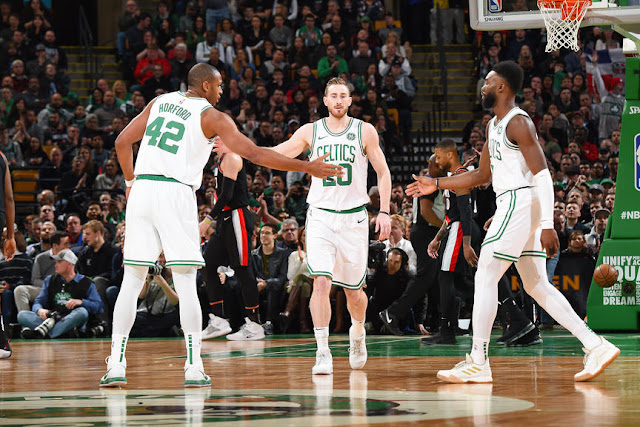 If the season ended today, Boston would  face the Philadelphia 76ers in the first round without home court advantage; this would likely be a winnable series, particularly if they continue to deal with health problems popping up with Joel Embiid and several other key rotation players.

They would then face the winner of the Milwaukee Bucks and Orlando Magic, so, in effect, the Bucks. Boston's proven they can play and win vs. league-leading Milwaukee, but this daunting path to the Eastern Conference Finals may still be almost as close to optimal as there is, with the prize of facing off with the Toronto Raptors (or, possibly, the Indiana Pacers).


Rough night for the Celtics on the out-of-town scoreboard.

Pacers and Sixers both win.

(Celtics have two games remaining with Indy and one with Phily.)
— Sean Grande (@SeanGrandePBP) March 1, 2019

The situation could be improved to grant the Cs home court if they get back to the fourth seed, and climbing to the third seed could produce a path like facing the Brooklyn Nets (not the easy W of years past anymore) before facing the Raps in the second round - while the Nets might be an easier series, I'd much rather face the Bucks before the Raptors or Pacers in the Conference Finals (the former has proven much more formidable for the Cs despite being the inferior team overall, and the latter, well -- can you imagine the narrative of losing to that team, sans Victor Oladipo? Yikes.)

With just a under a quarter season left, it's very unlikely Boston moves up or down below fifth or above third barring an injury to a key player or something equally catastrophic, so it is a small consolation should they drop more games they should not.

A very, very small one.