Today is the playoff eligibility deadline - will Boston sign a player?


If Danny Ainge and company are going to make a move to bolster the roster for the postseason, we'll soon know, as today is the final day for a player to be waived and have playoff eligibility, and all such eligible players must sign with a team by April 13 to play in the postseason. 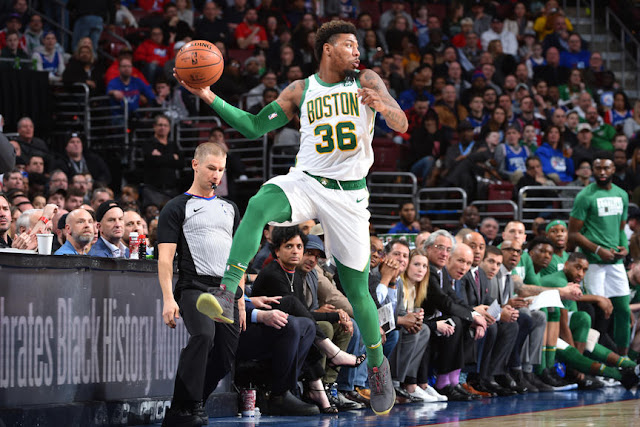 What this means for the Boston Celtics is that players still on other team's rosters who have been floated as potential buyout candidates need to have been waived before 12:00 am, March 2nd. The Chicago Bulls' Robin Lopez and San Antonio Spurs' Pau Gasol are two such players who were rumored to potentially seek buyouts along the lines of what Jeremy Lin and Wesley Matthews sought last month.


Last day for a player on an NBA roster to be waived (11:59PM) and have playoff eligibility. Jeremy Lin and Wesley Matthews are the only 2 players that took a post trade deadline buyout with the intent of signing with a new team (money was earned back).
— Bobby Marks (@BobbyMarks42) March 1, 2019

With no rumbles of such an eventuality occuring, that means Boston will have to choose from players already available, or soon-to-be released from their duties in other, overseas leagues.

For the former, some standouts include the Chinese Basketball League (CBA)'s Pierre Jackson, Jimmer Fredette, and Donatas Motiejunas, as well as Euroleague's Mike James, Nando de Colo, and Arturas Gudaitis - not exactly a murder's row of candidates. They'd also have to been eliminated from postseason play by the 13th, potentially thinning that crowd further.


Getting lots of questions about tomorrow's transaction deadline.

Tomorrow is the Playoff Eligibility Waiver deadline. That means it's the last day for a player currently on a roster to be waived and still be eligible for the playoffs if signed by another team.
— Keith Smith (@KeithSmithNBA) February 28, 2019

For the latter, the best remaining free agents out there include:

There are more options than these out there, but generally speaking, most others are too bad or too old to make it worth the squeeze, save perhaps Kendrick Perkins for probably obvious reasons (if anyone could save this locker room, it's Perk).
If I were Danny, I'd probably pass on overseas players, save maybe for Jimmer, who might be worth a shot for some microwave scoring off the bench with a nice narrative to come with it. Motiejunas could be an interesting wrinkle, too, but I don't trust big men with back problems in even a limited role.

The East-leading Bucks are among the teams that have weighed signing free-agent center Marcin Gortat -- who IS playoff-eligible for his next team -- but league sources say Milwaukee, to this point has elected not to take its interest further
— Marc Stein (@TheSteinLine) March 1, 2019

The rest of the list has few other enticing options; for me, I think Casspi, Gortat, Larkin (duh!), Z-Bo, Jack, and Okafor all have veteran mindsets with potentially useful skill sets in limited minutes, which is exactly what this team needs. My money would be one of these guys should Boston bother to fill the slot, which they may not by April 13.
Who would you most like to see in green and white come mid-April? Who would you most hate to see suit up among this crowd? Should Boston even bother? Let us know in the comments below.