Twin-Tower A-Team may be a go for the Celtics


It is great to see Brad Stevens thinking about moving somewhat away from his small-ball-forever concept. But I counter Brad's you-can-never-have-too-many-wings idea with my you-can't-have-too-few-bigs stand. He used the Twin-Tower, A-Team of Aron Baynes and Al Horford against Cleveland, and it worked, just as it has in the past. Expect more of it. 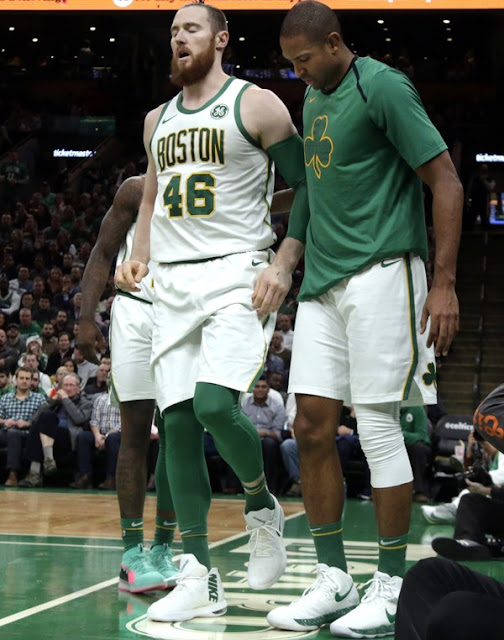 Al Horford on why the combination of himself and Aron Baynes works so well defensively: "I just think that anything with Baynes works. I’m out there, it’s great, but he does so much for us defensively."

Horford has no significant weaknesses in his game, with the possible exception of having trouble against some of the big, bruising centers. Baynes at center covers that quite well, while putting Al at the four. The small forward slot is wide open with the A-Team on the floor. Jayson Tatum, Gordon Hayward and Jaylen Brown all fit there.

Not gonna lie, Brad Stevens really enjoyed talking today about his Twin Towers Defense of Horford and Baynes. If both remain healthy, we might see that duo a lot moving forward.

Baynes-ey has never played more than the 18.3 minutes/game he tallied last season in Boston. I always wondered whether his limited production resulted from a lack of skills or a lack of playing time, so I looked at his per-36-minutes numbers for this season. It showed 12.7 PPG, 10.1 RPG, 2.6 APG, 1.4 BPG, 1.8 TOPG - while shooting 47% from the field and 83% from the charity stripe. Brad Stevens doesn't like to go with the little guys or the bigs with too much frequency, but it may be time for a longer look at what Aron can do, particularly alongside Al Horford.

To fix the defense, Celtics may go big: A look at why Brad Stevens sounds committed to using the Baynes-Horford frontcourt more often, after using it so rarely this season that the Wanamaker-Yabu tandem has played more minutes together. https://t.co/ZiB5dW4zW9