Are the Boston Celtics a better team without Kyrie Irving?

The answer, as you might expect, is complicated. For many of you, Irving's seeming nonchalance and erratic leadership in the face of losing to lesser teams may have frustrated. It's had me frustrated, too, to the point of seriously entertaining the idea of letting him walk come summer.

As much as my feelings want me to think differently, that's a stupid take, and I'll own it.

I owned it when I made it at a few moments of intense frustration, couching my words with, "I know this doesn't make basketball sense, but...", or something like it. Kyrie can be a maddening dude in the same sort of way he can be a gifted one - when it comes, it tends to come in a flood, then recede again until some moment it can gather and uncoil yet again. 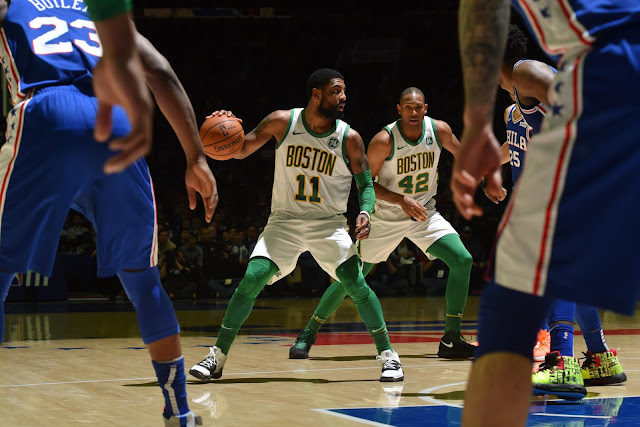 For fans, especially seeing the Boston Celtics fare well in his absence, the temptation is just to wash one's hands of the bad in the hopes that the vacuum he leaves will produce something better than the fraught landscape his (and let's be fair, the whole damn team save Al Horford, Marcus Smart Aron Baynes, and, recently, Jaylen Brown) disappointing season has created in Celtics fandom.

While you can't pull too many threads on the strength of schedule, the Celtics have now won 8 straight without Kyrie Irving.

It might, of course, accelerate the development of Jayson Tatum and Brown, and would open space for Terry Rozier to do the same. And it might spark chemistry able to propel this team to heights once seemingly in easy reach at the start of the season that are looking more like pipe dreams with every loss.

But it's far from certain, too. There is no evidence that the malaise which has descended on this team will go away with the trope of "addition-by-subtraction" becoming the path the Cs take going forward, and the only certainty we'd have is a top-20 talent departing to another, competing roster.

"This is a squandered season for Boston. If this season went one way, it would've ended with Kyrie keeping his promise, signing a contract extension, a trip to the Finals and a trade for Anthony Davis this summer." — @getnickwright pic.twitter.com/mI1dFVZ4xd
— First Things First (@FTFonFS1) March 26, 2019


It really could be the right move, but it's still a stupid basketball move from almost any angle save the emotional one, and Kyrie took a big risk in smoothing the tracks to land in Boston, one that he, like other point guards before him, saw derailed by injury. I'm going to give this thing another go out of respect for the many leaps of faith better basketball minds than mine made to get us to this point.

There's plenty of blame to go around with this team, and by this point in the season, I'm putting that on Brad Stevens and Danny Ainge with the simple caveat that the issue may be a structural one, and that key personalities in the form of a vocal, charismatic leader who knows how to lead by example is simply not on this roster, and with so much (young) talent, that might have been a fatal mistake.

And while Irving may have tried mightily (and failed nearly as much) at becoming that personality, it's not a convincing rendition -- yet. He's hardly entering what most people consider an NBA player's prime, and apart from those rare born leaders, usually a craft that needs polishing.


After the catharsis of my article after the San Antonio Spurs loss cleared, I made a decision based on Josh Coyne's recent article on coping with the saddest of Celtics contention seasons, and it talked me off the ledge, at least for now.

This team, and Kyrie, are what they are, and it's too late to change much about any of that until this summer. While the Cs may have won more games without Kyrie, the teams they have done it against have mostly been bad.They are hardly above .500 without him against playoff-caliber teams.

Wherever this team goes this postseason and this summer, for now, Boston's future is tightly tied to this contentious player, and unlike what others (and myself) have done in recent weeks, I'm going to embrace his presence on the team, and try to enjoy what's left of the season in both calendrical and metaphorical senses.

Kyrie's premature efforts at leadership may have bombed like Marcus Morris' shot has done of late, but as much as the selfish, emotional play may invoke similar responses from the fanbase when another avoidable loss piles up, even a player as great as Irving needs space to fail. I'll give this "faith" stuff one more try, and let Kyrie show us what he can do with the reins of a team, since we don't really have much else to lose at this point anyway.

The ball is quite literally in his court - let's hope this season isn't one big turnover.