Checking in on Boston's remaining schedule with 14 games left


The Boston Celtics have exactly 14 games left to get themselves into whatever shape they want to be in for the 2019 NBA Playoffs.

For coach Brad Stevens, that means some attention to weak elements of Boston's game, like transition defense, and while he hasn't exactly said it explicitly, fortifying their play to avoid the urge towards shortcuts and low effort that have cost them so many winnable games this season. 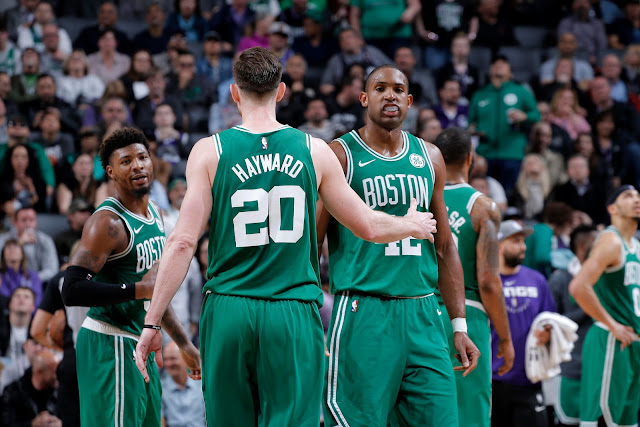 Of those 14 games, the first comes tonight, as the Cs host a scrappy young Sacramento Kings team likely hoping for revenge in TD Garden. Boston should win that easily, but if they act like they believe that, we might just be back to losing streaks in Chowder Town.

After that, the Celts have another gimme in a meeting with the Atlanta Hawks on Saturday, and another a week later vs. the Charlotte Hornets. They have a few more to close out the season, facing the Orlando Magic and Washington Wizards to close out the season in April, and should handily beat the Cleveland Cavaliers at the end of March for a total of six tilts that ought to be scheduled wins.

For the Celtics' seeding interests, that soft exit may prove crucial, allowing them to rest players if needed, perhaps even with an eye towards drawing more favorable opponents. But of course, they also need to at least get up ahead to the three seed to have that power in the first place, as the 4-5 draw is the same either way. In order to do that, there's some tough games on the schedule Boston will need to attend to.

Chief among them are the two matchups with the Indiana Pacers in late March and early April, as well as a game against the Philadelphia 76ers. Boston will likely have to win two of the three to steal the fourth seed, and all three for the third. The Pacers may have a brutal stretch remaining still, and the Sixers not much lighter, but with Philly looking healthier, only a handful of likely losses to the Milwaukee Bucks loom outside their game with the Cs

The Pacers, however, still have Boston, the Oklahoma City Thunder, and Denver Nuggets left to play twice each, with the Portland Trailblazers and Golden State Warriors for good measure. Boston should be able to make up those two games it currently sits behind the Pacers for the fourth seed, but nabbing the third seed will require a dash of luck and a lot of good play.

If you had to ask me, I'd say the fourth seed is slightly more likely than the fifth, and the third about a one-in-three shot at best. But the Cs can control their fate if they improve their transition D as Brad hopes they will. And not dropping games to lottery-bound squads certainly won't hurt either.