Ever since Zion Williamson's shoe almost literally exploded in a game on February 20, I have analyzed how much his weight and strength played a role in the destruction of his left shoe. He is in lateral motion and plants that left foot - the sole gains instant traction in contact with the floor - and much (most?) of that weight (285 pounds) and dynamic energy is immediately transferred to the left side/bottom of the shoe. The result? The shoe fails. Was it the shoe's fault? Maybe. At least partially. But the force exerted by Zion the Bionic Man on the left side of that shoe had to be extreme. 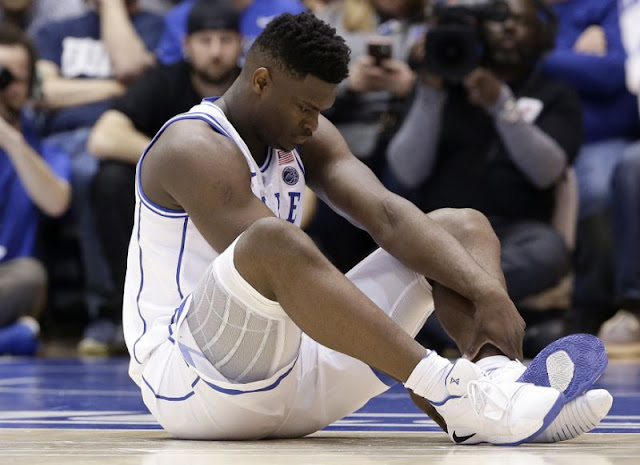 How strong is Zion? Four fingers pressing in on the ball like it is a balloon strong pic.twitter.com/dE4CeRO2e9

Duke faces Syracuse tonight, and a Duke tweet appeared showing Zion lacing up a pair of Nike Kyrie 4's, apparently choosing them over the Nike Lebron 16's. Here is SI's Jarrell Harris' take on both the Kyrie 4/5 and the Lebron 16:

NIKE KYRIE 5
Kyrie Irving has one of the best signature lines in the NBA and they are a favorite for Zion, who has worn the Nike Kyrie 4 throughout most of the season. The best thing about the Kyrie 5 is the containment system that was inspired by the Venus Flytrap. If Zion can break out of that, we might need to find him a metal sneaker to wear. Inside the Kyrie 5 lays a Air Zoom Turbo unit that curves to wrap the bottom and sides of a players’ foot. With every quick change of direction, the shoe delivers responsiveness. Irving is an elusive player and is constantly making cuts to get to the basket. Zion is similarly always on attack mode and the shoe would cater to his strength.

NIKE LEBRON 16
If anyone understands what it feels like to be Zion, it is LeBron. Williamson is the most hyped sneaker prospect since James signed a $90M deal with Nike in 2003. LeBron is a freak athlete and his shoes have been the best when it comes to durability and security. They are at times bulky but they work for athletes that play on power such as James and Williamson. LeBron designer, Jason Petrie created Battleknit 2.0, which is strong enough to contain James’s foot. Zion has worn the LeBron 16 this season but prefers sleeker models as mentioned. If Zion wants to avoid any other sneaker mishaps, the LeBron 16 is built to guarantee protection.

Williamson is an absolute powerhouse. He destroys shoes, deflates basketballs and generally performs on the court like nobody I have ever seen. We wish him well in his return from injury and hope his Kyrie 4's hold up. If not, this may be his next pair. We may be hearing a new word, ZIONIC, to describe the play of this young super-athlete this coming NBA season.

If you have strong feelings about the right choice for Zion, vote in the Twitter poll or via the comment section. The steel shoe is not a choice - not yet!

What is your shoe choice for Duke's Zion Williamson?