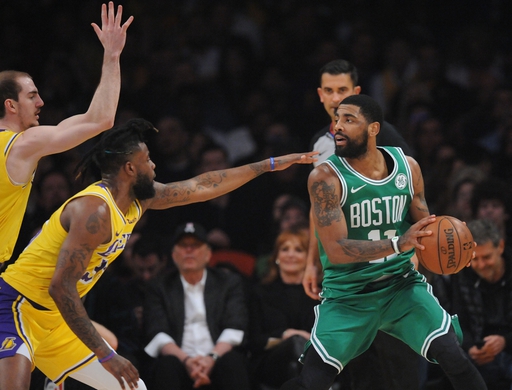 The Boston Celtics continued their successful West Coast road trip with a convincing win over the Los Angeles Lakers, 120-107. Kyrie Irving had a big night, scoring 30 points on 12 of 18 shooting (5 of 8 from three), 7 rebounds, 5 assists, and a pair of steals. Marcus Smart had a great night shooting the rock as he finished 6 of 8 (4 of 6 from three) for 16 points to go along with 5 assists, and Gordon Hayward had another solid outing off the bench, adding some offensive punch with 15 points on 6 of 8 shooting and matched Kyrie with a team high +14.

For the Lakers, LeBron James did his part as he tallied himself a triple-double with 30 points, 10 rebounds, and 12 assists in just 28 minutes, and despite getting big nights from Moritz Wagner and Jonathan Williams with 22 and 18 points respectively, the Lakers didn't have another scorer finish with at least 10 points and shot an abysmal 18.5% from the outside (5 for 27) in the loss.

The Celtics led for virtually the entire opening half, despite not playing their best basketball, but a 7-0 run heading into the break had them up double-digits at halftime. Irving helped keep them out front, leading the team with 11 points and 4 assists, including this gem:

The C's stayed hot to open the 2nd half with a 11-2 run that including three 3-pointers from Smart. LeBron and Wagner refused to let the game get away as they both carried the offensive load in the 3rd quarter for LA, keeping them afloat.

But then Irving went full Uncle Drew and rallied the C's back into control of the game and up big:

The Celtics will look to complete their West Coast road trip with a sweep if they can pull off another win in LA on Monday night, this time against our old pal Doc Rivers and the Clippers.