Mark it down on your calendar, folks - a day I never dreamed of has arrived.

For years, I've absolutely bristled any time someone has suggested we bring Carmelo Anthony on board the Boston Celtics, but now...I'm ready.

I'm ready for all the wrong reasons, mind you - not because I believe something has substantially changed about the ball-hogging, ISO-playing, funk-faking Melo we've come to know over the years. 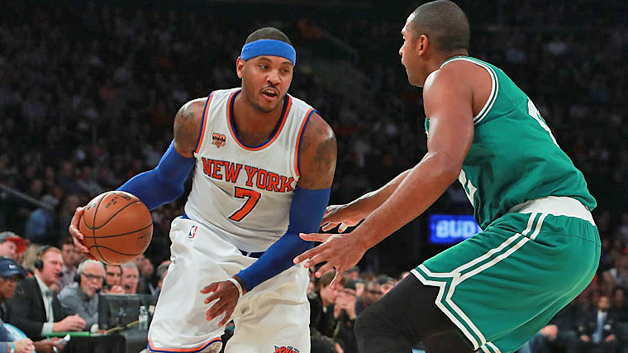 Quite the opposite, actually, and if you mistook my description of him for Kyrie Irving, it's not a coincidence. In fact, the reason I'm open to trying out Anthony, should he be mutually interested in playing for Boston, is precisely because I want Irving to see how he appears to his fans, if not also his peers.

I want Brad Stevens to have to deal with yet another body who checks out when things stay going the wrong way, instead of trying harder, or swallowing their pride to work for something greater. And I want his teammates to have to put up with yet another mouth to feed who will watch them stand around in the hopes a pass comes their way, only to see an ill-advised trey miss badly...again.


In sum, I am no longer against the Celtics signing Carmelo because, save a small cadre of stalwarts, the team has become Carmelo Anthony, personified.

That's this team's identity; theoretically incredibly talented, but selfish when they shouldn't be, and almost always too late to stop being lazy. Maybe that's harsh, but until we see otherwise, that's what we have in both Melo and Boston - could it really get much worse with him on the roster?

On second thought, let's not try to answer that, lest we find out.