Can Boston capitalize on their win to move up in the seeding?


The Boston Celtics may have found the team we've all been expecting to see this season in their utter drubbing of the NBA's defending champions last night, but how they do over the next month is far from determined just the same.

One can make the argument that, this year at least, seeding is perhaps as unimportant as it's been since Boston's last window of title contention was open, but it's certainly a concern, and with only four games with teams likely to make noise in the postseason left on the schedule, there won't be many more such opportunities for the Cs to flex like they did on the Golden State Warriors' home court.

Blessed with something of a lighter schedule to close out the season compared to the gauntlet Boston is mostly done with after last night, the Celts may be able to control to a certain extent where in the seeding they fall, with only the Indiana Pacers looming as a plus-.500 team in the month of April. 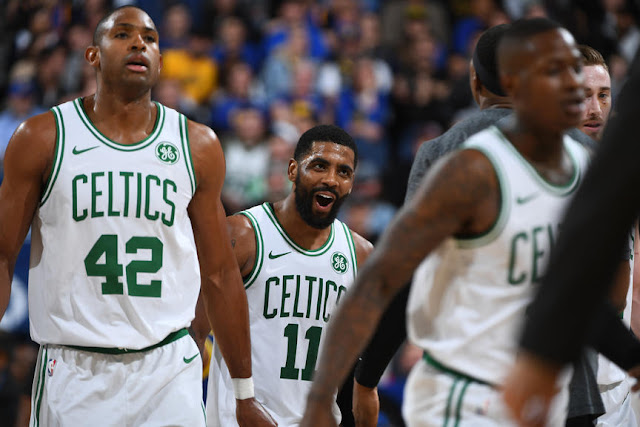 Before that, only the Denver Nuggets, Philadelphia 76ers, and another tilt with the Pacers will be against teams likely to advance beyond the first round of the playoffs, and only the Los Angeles Clippers, San Antonio Spurs, and two matches (including tonight's) with the Sacramento Kings remain for other plus-.500 clubs.

That leaves eight games against some of the league's worst teams, with the 76ers 2.5 games ahead of Boston's current fifth-place position in the East, and the Pacers a mere half-game ahead of that. The Toronto Raptors and league-leading Milwaukee Bucks are currently too far ahead to have any real chance of being caught, at seven and 9.5 ahead respectively, but with continued good play, the fourth or even third seeds are still within reach with a bit of luck.


The Sixers will be down three big men tonight versus an Orlando Magic team with impressive wins on its resume lately.

Philly may have a decent lead over Boston for this late in the season, but with Joel Embiid out for at least another game and possibly several with recurring knee issues, even when he returns, he'll have to rest much in preparation for the postseason. Reserve Boban Marjanovic, also dealing with knee trouble, doesn't even have a timetable to return, making the Sixers' frontcourt paper-thin even when Embiid returns.

While Furkan Korkmaz is not a major part of the team's rotation, his absence to knee surgery (I'm sensing a pattern here) certainly doesn't help a team that had depth issues before anyone got hurt, and with five games against some of the most elite teams in the league remaining (the Houston Rockets, the Bucks twice, Indiana and Boston) plus three more likely playoff teams, the 76ers are looking at at least as rough a ride as the Cs to close out the season, and possibly worse given their health.


By no means are the Pacers out of the woods, but they did enough to pull out a win over the Bulls before the most difficult part of their schedule kicks in. https://t.co/1wY8ft1ioa
— USA TODAY NBA (@usatodaynba) March 6, 2019

Indiana is, of course, missing Victor Oladipo, and an ill-timed ankle sprain by Domantas Sabonis will probably not help despite the fact the team has done well without Oladipo, but it's not health that may cause the team to stumble. They currently have one of the toughest schedules left in the NBA, facing the Bucks, 76ers, Oklahoma City Thunder (twice!), Nuggets (also twice), Cs, (also twice) Portland Trailblazers, and the Warriors for elite teams, along with four games against likely playoff teams.

A murderer's row if ever there was one, the Pacers are primed for at least a little slippage, but the question remains to be answered whether Boston can stay out of their own way long enough to make use of it. With last night's results, the outlook has certainly improved, but experience has taught most fans to wait and see how things pan out before declaring the team's problems solved.