The Golden State Warriors blamed their blowout loss to the Celtics on lack of collective effort - which ironically sounds like the verbal barrage focused on Boston of late. But the Bay Area media seems to think that DeMarcus Cousins may be responsible for a large share of the blame. All block quotes are via Mercury News' Dieter Kurtenbach: 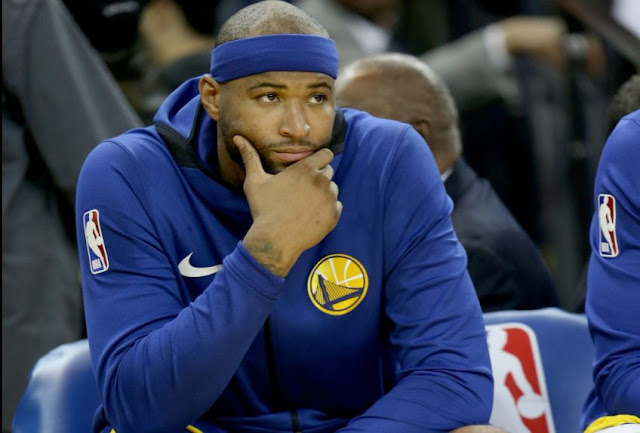 The Warriors don’t have much time to solve their DeMarcus Cousins conundrum
The Warriors seem to go as Cousins goes, and given his play, that’s a dangerous connection.

Boogie had 10 points (4-of-12 on FG's, 0-of-5 on 3's) with nine rebounds and four assists in the 128-95 loss to Boston. Cousins has never been compared to Bill Russell on the defensive end, and last night was no exception.

Indeed, no one can reasonably claim that the Warriors brought it in the blowout — it was another apathetic performance from a team that’s gone through the motions time and time again this regular season.

But given the way the Celtics were effectively targeting Cousins seemingly every time they had the ball, I’m not certain that increased effort would have flipped the script of the game.

It speaks to a larger issue, too: We’re 17 games into this Boogie experiment, and despite a strong start, it’s not working yet.

And there isn’t much time for the Warriors to figure it out before the start of the postseason.

DeMarcus is still trying to work his way into the Steve Kerr's system, but his defensive shortcomings seem to be the major part of his lack of fit with the team. Golden State is expected to sign Andrew Bogut as a free agent, supposedly as Boogie's backup. It may be time for Cousins to start playing defense and fit into the Warrior's system.

Cousins was always a poor defender, but on Tuesday night, he was downright unplayable. It wasn’t the first time that’s been the case, either.

Giving a player like that 30 minutes a game in the playoffs is playing with fire, even for a team with four other All-Star players and an NBA Finals MVP.

Cousins should be the Warriors’ third or fourth offensive option in the Warriors’ starting lineup – a stretch 5 or high-post maestro who can mix it up in the paint as a change up. Alas, he’s increasingly looking like a classic center who’s the first or second option.

Lost in all this rhetoric is the fact the Celtics played a finely-tuned team game and came away with the win. And at least for the present, the Warriors appear to be vulnerable. Kurtenbach suggests that the Warriors trying to boogie with Boogie is a mistake. Let me suggest he is correct.