With 24 games to go, time to get Gordon Hayward back in the starting lineup


There are only 24 regular season games remaining in the Celtics regular season schedule. In last night's win over the Detroit Pistons, Gordon Hayward was back in the starting-5, replacing the injured Kyrie Irving. Jayson Tatum moved back to his somewhat-familiar shooting guard slot, and almost everything seemed to work well. 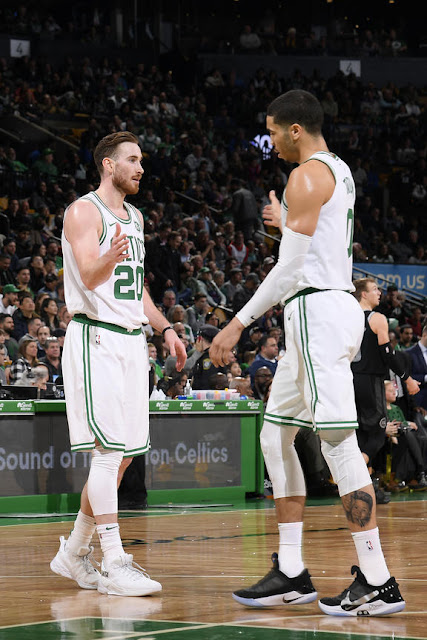 In 34 minutes of action last night, Hayward garnered 18 points, five rebounds and eight assists (with only two turnovers). Over the last three games, he has averaged 21 points on 63%/69%/89% from the field, beyond the arc and from the charity stripe, respectively. You might say that Gordon is back!

I see Al Horford, Kyrie Irving (when healthy) and Gordon as mainstays in the starting-5. The Marcus Smart-as-starter experiment has worked nicely, and that may stay the same. He gets his team energized right out of the gate. But this is the way I see it.

I have really liked the development of the Jay-Team, Jayson Tatum and Jaylen Brown, this season. Jayson has become a better rebounder, and both young guys are taking it to the rim more often. But both need to improve their passing games. Hayward in the starting unit with Al, Gordon, Jaylen and Jayson at this juncture is worth a try.

The fine-passing trio of Irving, Hayward and Horford (14.4 combined assists/game) seems tailor-made to offset the assist deficiencies of the Jay-Team (3.2 combined APG). And since I am still not sold on Terry Rozier as a true point guard, putting Smart into the second unit cures a lot of that. Marcus Morris has already stated that he is fine with going to the second unit, and his shooting skills and rebounding are needed there.

So it may be time for another lineup experiment - or maybe it has already started with Hayward starting last night's game. It seems like a natural. The Jay-Team in the starting-5 may be up for argument, but it is worth a shot.