The Celtics road win over the Phildelphia 76'ers was much-needed. The game was close all the way, and here are some interesting tidbits from the matchup against one of Boston's major rivals. 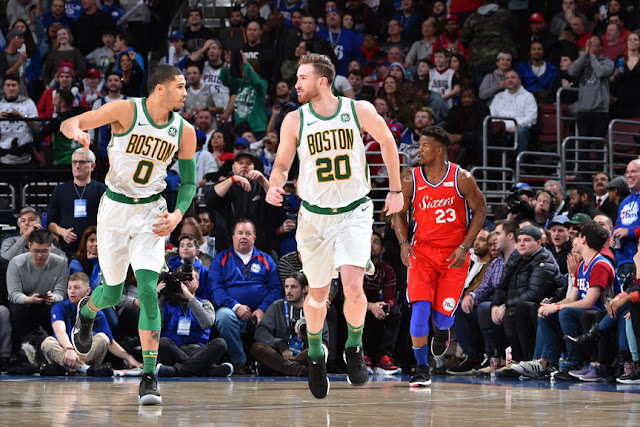 1.) Boston seems to have Philly's number no matter who the 76'ers put on the floor
The Celtics have been victorious in all three games versus the 76'ers this season - with an average margin of roughly nine points. This game was in Philadelphia, and the Sixers have added Tobias Harris to their roster. Didn't matter. Another win for the Celtics.

2.) Kyrie Irving's teammates are forced to ramp up their games without him
The Celtics are now 28-19 (.596) when Kyrie Irving plays - and 8-2 (.800) when he doesn't. Last night, Al Horford, Jayson Tatum, Marcus Morris and Gordon Hayward all came through with big games to cinch the win. The Celtics played tough and physical against Philly, and it worked. The players seem to step up when they can't rely on Kyrie's large contributions.

3.) Gordon Hayward will be a huge part of the Celtics success going forward
There will still be some duds from Gordon, but last night showed he just keeps getting better. In the flow of this game, he scored 26 points in 28 minutes on a blistering 73% from the field and 86% on threes. His plus/minus of +11 was a team-high.

4.) The low-post plays from the Jay-Team need to increase
Both Jayson Tatum and Jaylen Brown are both adept at getting into the paint and scoring. They need to do more of that. Boston relies too much on 3-pointers and not enough on driving into the paint for scores or free throw opportunities. The Celts shot 45% on 3-pointers in this game, but if not for the combined 9-of-12 on threes from Gordon and Al Horford, this game would have gone down as a loss.

5.) Boston did a great defensive job on Joel Embiid
Al and Daniel Theis worked hard against Embiid in the low post, but it was the erratic help-defense that rattled Philly's star big man. He never knew when the double-teaming would come.

6.) The game was close all the way, and the guys in green never had a chance to relax and get complacent.
They needed to focus and grind out every play to win this one - and that is what they did. There was never going to be a blown 28-point lead in this contest.

7.) Marcus Morris needs some accolades for his early contributions
Morris' eight points, four rebounds and one assist in the first quarter were vital in the win.

9.) The Celtics held their own against the 76'ers in rebounding
Despite Philly's size advantage, the Celtics held them to their season-average of 47 rebounds - with Embiid grabbing 14. Boston garnered 41 boards. Not bad considering Philly's length (Embiid 7', Boban Marjanovic- 7'3", Ben Simmons - 6'10", Tobias Harris 6'9").

@jaytatum0 spins through the lane and slams it home in tonight’s @JetBlue Play of the Game! pic.twitter.com/RwPYs10cKH

10.) Exciting plays and winning bring fun to the game
It came at the 7:53 mark of the third period. Tatum had the ball and did an electrifying spin move - followed by a thunderous slam. But the treat came with the camera focusing on the laughter and gyrations from the Celtics bench. That is what the game is all about.