Ten quick thoughts from Celtics win over the Thunder


This one could have gone either way, but Boston came out with the 134-129 win over the Thunder. Here are ten thoughts from the contest. 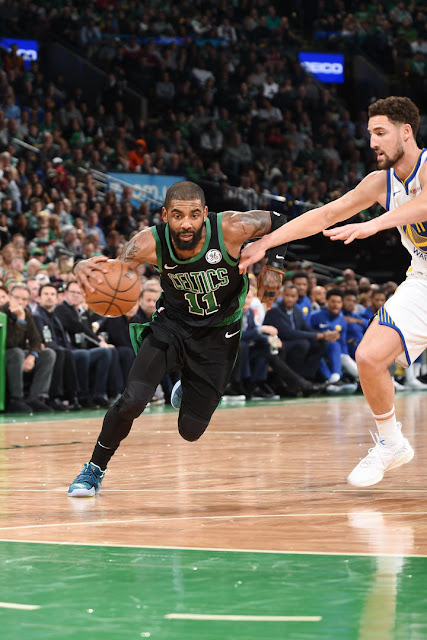 1.) Celtics need Clutch point guard, Kyrie Irving for the playoff run
His stat line of 30 points, four rebounds and 11 assists doesn't even tell it all. Irving's offensive repertoire puts immense pressure on any defense, and take a look at his own defensive disruption of the Thunder's attack with the clock ticking down (at the 7:35 mark of the video).

First play of the game and Marcus Smart grabs a steal and assist. 💪 pic.twitter.com/VsmBJPdGI4

3.) Al Horford and Kyrie Irving have shown the most consistency in the recent past
Their synergy is evident in every game. Al garnered 17 points, two rebounds, nine assists, two steals and a block last night. He and Kyrie were vital in the victory.

4.) Marcus Morris' scoring and rebounding have been sorely needed
Morris collected 19 points and seven rebounds in the win, but only one assist in 33 minutes. Just behind Kyrie and Al, he may be the most-consistent Celtic.

5.) Jaylen Brown has added some low-post moves into his game
His accuracy from all points on the floor has improved lately, but adding another element has also made a difference. Getting feeds down low and using his footwork to advantage have paid off.

6.) Celtics may have the most-balanced team in the NBA
Last night was just an example. Oklahoma City had six players score in double figures. Boston had eight. The Thunder garnered 25 assists to Boston's 36. The Celtics have so many weapons that can use against opponents.

7.) Kyrie Irving looks like Rajon Rondo with a shot
Rondo is known as an effective, ball-dominant point guard, but he has always struggled with his outside shot. Not so with Irving on the accuracy factor. He can pass, rebound and penetrate like Rondo, but he also can hit from everywhere.

8.) Gordon Hayward will still have his duds as the season progresses
Last night was one of them. Only three points on 1-of-6 shooting in 23 minutes. With roughly 30 games remaining in the schedule, I truly believe he will be at least 90%-of-fully-recovered by playoff time.

9.) Kyrie Irving and Marcus Smart have emerged as one of the top backcourts in the NBA
Why didn't Brad Stevens listen to me sooner - when I wrote the following on November 12, 2018. The Celtics have a 24-9 (72.7%) record since Smart went into the starting-5. The starting backcourt may only take a seat to The Warriors Steph Curry and Klay Thompson.

If Danny Ainge were the coach, I believe he would have tweaked the starting-five, possibly by inserting Marcus Smart and giving Brown more offensive leeway on the second unit. Smart gets to ignite his team right away and not allow them to get even close to stagnant.

10.) Kyrie Irving careful not to show too much affection for Boston
In his post game interview, Kyrie was asked about the feeling in TD Garden with the Patriots in the Super Bowl. His response, "It's awesome for the City of Boston - so go Pats" was hurried and passionless - and calculated. As was his departure from the interview. There was no "This is exciting, and I want to be part of it all" - nor should there have been. Why would he verbally commit to a future that remains shrouded in mist. Things will get clearer on July 1st.