The word fat is a relative term. The normal guy-on-the-street is clinically obese at 25% body fat and above. A professional basketball player is overfat at 8% or above. Both Kyrie Irving and Marcus Smart were north of 10% body fat just prior to joining the NBA. 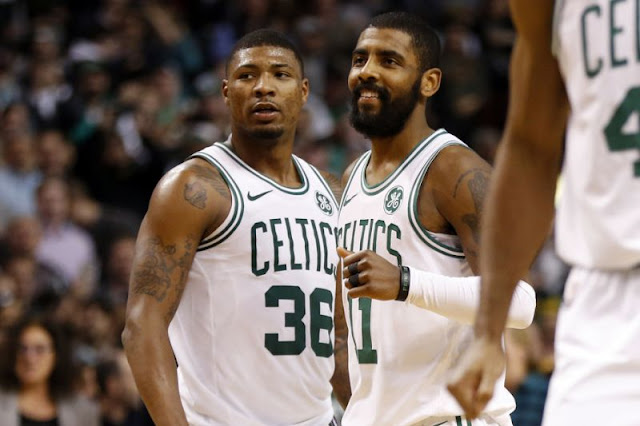 Irving was measured at the Combine prior to the draft at 10.2% body fat. Here is some further information on that, per Akron Beacon Journal.

8 years ago – via Akron Beacon Journal
Kyrie Irving’s body fat measured 10.2 percent Friday at the NBA Combine, a byproduct of the toe injury that cost hm three months of his freshman season at Duke. Irving said he was embarrassed by the number, but is confident he’ll shed it before an NBA training camp in the fall. “It shows the amount of work I still have to put in to get my body to where it was,” Irving said. “I’m aware it’s at a percentage where I don’t want it to be, but I can’t do anything about it being away from the game for that long. It was bound to happen. It shows the body work I still have to do.”

Prior to his being drafted, Smart came in at 10.55% body fat. Before the 2017-18 season, Marcus had lost weight/fat and I wrote about how that may improve his performance. Note Stallard's pre-NBA analysis being damn close.

Tom: He will have the weight, strength, wingspan and fiery determination to guard bigs and the speed and quickness to defend ball handlers and wings. And never forget the fear factor. Marcus instills fear in opponents. He backs down from nobody. Here is another pre-draft analysis, this one via NBAdraft's Jacob Stallard.

Stallard: Can play with guard position and can also defend multiple positions due to his size/quickness combo…Has a nose for the ball. Will dive on the floor to get loose balls and will rip it out of the offensive player's hands from time to time...Shows flashes of greatness in the pick-and-roll as both a scorer and a passer…Outside shot can be effective when Smart is on his game, making him a great inside-outside weapon...Makes winning plays.

Irving and Smart this season are as fit and lean as I have ever seen them. They form an elite backcourt, outdone perhaps only by the Warriors Steph Curry and Klay Thompson. There is nothing that hampers an elite athlete, other than a severe injury, more than excess fat. A good lesson for all of us. Kyrie and Marcus knew that - and worked to get leaner.

Special Note: Let me start by saying, I am not a high-level athlete - never was - never will be. But at the age of 75, I still train like one. And I still train others and have been doing that for a quarter-century. I have worked with thousands of individuals on fat loss, muscle gain and fitness generally. Many of my articles will have some of the most-direct advice you will encounter. It goes against much of what you hear and see on a daily basis - the stuff that makes money for gyms, health clubs and personal trainers. Here is the first one:


Cardiovascular exercise has very little value for the average Joe-on-the-street with regards to weight loss. Get off the treadmill and stepper if you are using them to lose weight. They have very high value for health, well-being, mood, sleep and many other results - just not weight loss. My client with the most weight loss? His name was Rich and he lost 322 pounds (517-to-195). His calorie intake? About 700 calories per day, doctor-monitored. My rule (now widely accepted), applies somewhat less to athletes. More on that later.