The Boston Celtics, even now, have one of the most attractive warchests in the NBA - despite using much of it to populate the team's current roster, a testament to "Trader" Danny Ainge's famous moniker.

Recent developments out of his control may have made that warchest even more interesting, however, so we thought we'd take a look at the Celtics' raft of draft picks now that the season has advanced enough that we can have a good idea about how this year's will pan out.

We have likely heard how the picks are hoped to be used: namely, to lure the New Orleans Pelicans into dealing their star big man Anthony Davis to the green and white. But for which picks, and what else might be done with them, and future picks owned by Boston should such a deal not materialize? 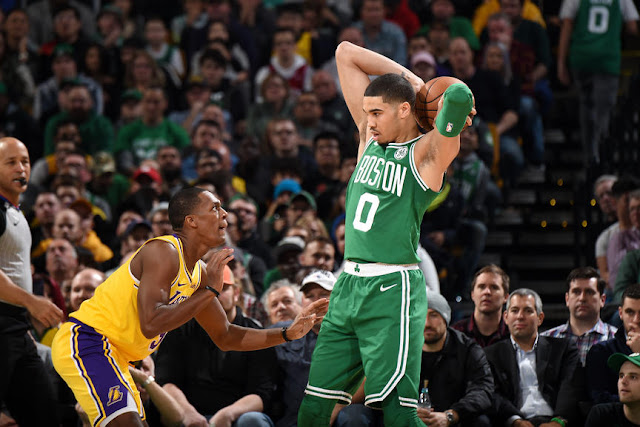 Let's start with an inventory for this year, as Boston's haul could potentially convey entirely this season, even if unlikely at present. We'll follow that with a short breakdown about each first-round pick (FRP) and second-round pick (SRP), along with analysis of how it will likely convey.

For 2019, Boston owns its own FRP, and potentially three others, while owing its own SRP to the Memphis Grizzlies. The other three picks came from the Los Angeles Clippers, either the Sacramento Kings or Philadelphia 76ers depending on protections, and the Grizzlies' FRP.

I said "potentially", because while the Cs will get their own pick and something from the Kings/76ers pick no matter what, the other two may not convey this season in any form. The Clippers pick only conveys if they do not make the postseason (and will be similarly protected next season, after which it will become a SRP), and the Memphis pick is protected 1-8, falling to 1-6 if not conveyed this season, and becoming unprotected afterwards.

Bad news for the Lakers and Kings on the West playoff front: Sources say Clippers owner Steve Ballmer has made it clear he wants to make the playoffs - first round pick be damned. Intel on all three teams here https://t.co/jREiqe2Qeu
— Sam Amick (@sam_amick) February 22, 2019


If the season ended today, Boston would likely receive the 23rd overall pick with its own selection, the 19th overall pick from the Clippers, and the 14th overall pick courtesy of the Kings. I think something like this within 2-3 slots for either is the most likely outcome, given the Kings are trying to stay out of the lottery, and have just been joined, surprisingly, by the Clippers, while the Los Angeles Lakers very much want the same despite only winning four of their last ten games.

That race for the last spot or two in the West will be the deciding factor of when -- or if -- the Cs see the Clippers pick, and could modulate the value of the Kings pick enough to mention as well. Mercifully for Boston, the Lake Show has games remaining against Boston, the Milwaukee Bucks (twice!), Denver Nuggets, Toronto Raptors, Brooklyn Nets, Charlotte Hornets, Utah Jazz (twice again), Kings, Oklahoma City Thunder, Portland Trailblazers and Clips in their final 24 games of the season.

That leaves only 10 tilts against non-playoff caliber squads and a star fresh off the worst injury of his career; a tall order for LeBron James in the regular season if ever there was one - Boston may literally be playing for a draft pick when they face them at home March 9. Should James somehow manage to lift his team to the playoffs for a quick dispatchment by the Golden State Warriors in the first round, Boston would likely have to wait until the summer after next, as the Clips have designs on considerable cap room with an already solid team.

This makes it even less likely the Celtics will get the Grizzlies pick this season. That’s a good outcome for Boston. The pick has more value as future unknown than a mid-lottery pick this year. https://t.co/qtnVJZwzhs
— Keith Smith (@KeithSmithNBA) February 23, 2019


There's a very small chance the Grizzlies win enough games now that the race to the bottom begins in earnest, possibly aided by unexpected movement in draft order, but after choosing to sit their rookie prospect Jaren Jackson Jr. for the season after a quad injury, the odds are low enough to be negligible. While the Cs cap situation would likely benefit from filling out the roster with guys on rookie deals, that will be a concern for several seasons to come.

The delay with the Grizzlies, who will likely be bad for at least another season or two, may actually be beneficial, as the pick drops to top-six next season, and potentially nil the season after in what is being seen by some as a "double draft" given all the reclassification that may occur if the league removes the 19-and-up rules currently in place.

ESPN's report of one-and-done ending as soon as 2021 is the absolute worst-case scenario for Heat, who forward unprotected first-round pick to Suns that year. It would essentially make it a double draft class (2021 college freshmen, 2021 high-school seniors).
— Ira Winderman (@IraHeatBeat) June 15, 2018


So, let's take a look at the ceiling and floor for these picks in and of themselves in terms of overall value, apart from what might be done with them:

Ceiling: Boston gets its own FRP at about 23rd, and the Kings pick at about 12th (the Kangs are also looking at 14 out of 24 opponents being playoff-caliber teams with as may tough outs or more than the Lakers), with the Clips pick conveying in 2020 around 18-24, and the Grizzlies' pick the following year in the top eight of a loaded draft.

Floor: Surprisingly high still, with Boston's own 2019 FRP falling as is projected, the Kings "surging" all the way to 16th or so with a late push, the Clippers' FRP converting to two SRPs three summers from now after failing to land the right free agents, and the Grizzlies doing strangely well next season, delivering a 16th overall pick in the 2020 draft.

I hope AD’s shoulder is OK. I’d hate to see him jeopardize a great trade to Celtics for all those wonderful draft picks. #Pelicans
— Lyle Spencer (@LyleMSpencer) February 15, 2019


Most likely, our estimates at the beginning of the article (Boston with the 23rd 2 [own],19th [Clippers], and the 14th [Kings]) is what we're going to be looking at, with the future Grizzlies and the 2019 Kings pick ending up in a package for a certain newly-infamous big man. But as you can see, the picks could break a lot of ways in a lot of years, and, apart from the deflated value of the Kings after their own surprise success, mostly look good for the Celts.