Rondo feels at home in Boston - too much so last night


We should have known. Rajon Rondo doesn't like to take a back seat to anyone, including Lebron James. It was James that had the triple-double in the Lakers 129-128 victory over Boston, but it was Rondo that won the game in the closing seconds with his first-ever game-winning shot in the closing 10 seconds of the game. 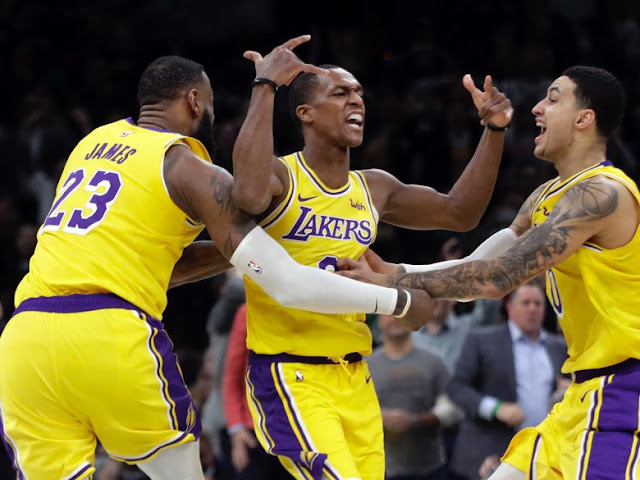 At one point in the game, the Celtics had an 18-point lead, but that had been whittled down to one point as time was expiring. As Brad Stevens put it after the game, "the basketball gods were smiling" on the Lakers - and on one of them specifically, Rajon Rondo. He was in the right place when the ball bounced into his hands, and he launched a 20-footer that sealed the victory (per NBA's Kyle Hightower):

I practice those shots all the time,'' said Rondo, who hit his first career go-ahead field goal in the final 10 seconds of fourth quarter or overtime. ''Couldn't imagine it being in the Garden though. ... This is one I'll be playing for the rest of my life'.

Rajon Rondo buries the #TissotBuzzerBeater to win it for the @Lakers in Boston! #ThisIsYourTime #LakeShow pic.twitter.com/SuGZSzrZGE

I have to be honest here. If it had to happen, I am glad it was Rondo that took the game away from Boston. Would you rather it have been The King, someone I hold in extremely high regard as a player - but less and less as a human being? Rondo didn't achieve Lebron's triple-double, but he came close with a 17/7/10 line. If the Celtics had to lose the game, Rondo deserves the accolades. He showed the Boston fans he still has game. But did he have to be so damn comfortable on our own floor?