Daniel Theis came through big-time in last night's close loss to the Lakers. He was on fire from the floor, scoring 20 points while shooting 9-of-11 - and also from beyond the arc, hitting 2-of-2. He added six boards, two assists and two blocks - walking away with a team-high (tied with Terry Rozier) +14. The question remains, if he was so on fire, why did he only get 22 minutes of floor time? 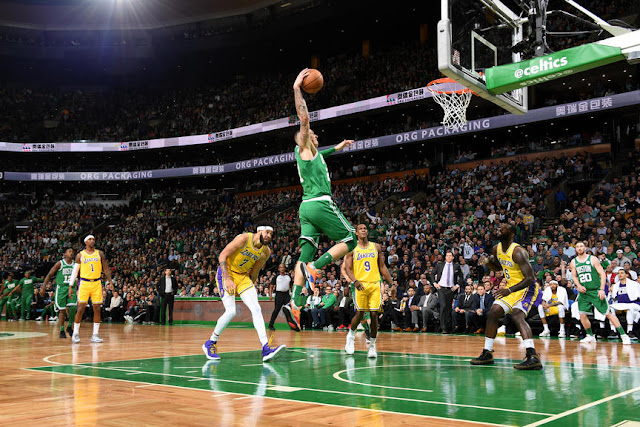 It is games like this from Daniel that tell us that he hasn't reached his peak. Hell, he is only in his sophomore season. He and T-Ro led the bench attack that came within a bad bounce to Rajon Rondo of taking the win.

Daniel Theis was really such a sneaky pick up. Offers so much off the bench. #Celtics

My argument on Theis is that last season, he continually improved as the season progressed. This year, his minutes have not increased because of the Celtics depth. If he has games like this in his second season in the League, we can think there are more of them waiting to be let loose.

He fits the Celtics mold perfectly. He can play the four or the five - hit from outside - drive to the hoop for jams - rebound - blocks shots. As the regular season winds down, it might be an opportunity for Brad Stevens to get Daniel at least a few more minutes on the floor.

Theis is signed this year at $1.4 million and will be a restricted free agent this summer. He is the 10th man on this Celtics squad, but his talent and potential will demand much more than a qualifying offer. Gonna be an interesting off-season for Danny Ainge.