Earlier today, on news the New Orleans Pelicans fired General Manager Dell Demps, I made a joke they should consider Kevin McHale as an option for their next front office head for hopefully obvious reasons.

For the very young or new Boston Celtics fans, that would be because of the perception that Kevin's ties to Boston helped grease the wheels for a Kevin Garnett trade that would ultimately net the franchise its 17th banner, and while clearly a jest, we seem to be hearing earnest chatter for a similar such move. 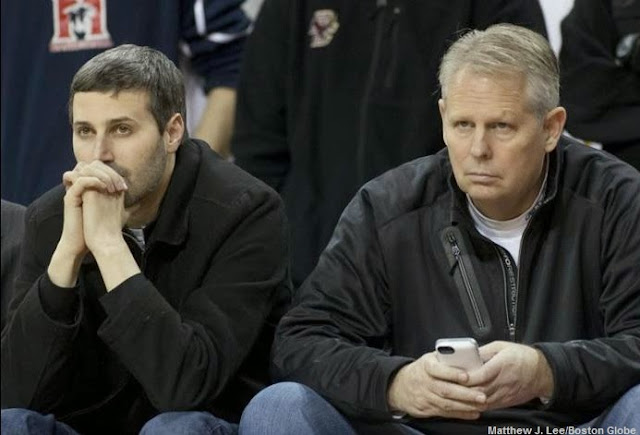 The New York Times' Marc Stein suggests the Celts' assistant GM Mike Zarren will join former Cleveland Cavaliers GM David Griffin as likely candidates to replace Dell, and while I can't say he's wrong, let's take a look at Zarren as a candidate; a lifelong Celtics fan in a position many believe is as heir apparent to Danny Ainge, one would assume such a Celtics junkie wouldn't even think of jumping ship to a small-market club with an ownership group known to be one of the cheapest and most unstable in the league.

But, you never can tell what a person wants until an offer is in front of them, right? Well, how wise would it be to hire the right-hand-man of the franchise you are most likely going to be doing business with for one of the most important moves in the history of your franchise?

If you asked me (not that anyone is), it sounds a little, well, stupid.

Of course, it's quite possible one can trust Zarren (or any professional who might legitimately deserve such a job) enough that NBA fandom and personal friendships and allegiances to not be clouded in the right situation. That's not at all unreasonable, except there's a lot to lose here, and Griffin, for example, has proven himself capable of taking a bad franchise back to prominence with minimal tools in a climate of questionable ownership competency - in my mind, he's the man for the job.

Call me crazy, but passing on being Danny Ainge's heir apparent to work with one of the messiest ownership groups in the league doesn't sound like a good plan. Griffin (or Hinkie, if they're braver than I think) would be great targets. https://t.co/iQyCf1s72W
— Dr. Justin Quinn (@justinquinnn) February 15, 2019

There's other candidates, too, like Sam Hinkie, and yes, even McHale, among probably many more who may emerge from the woodwork to try and land that job in the coming months -- except...

Except the newly named interim GM of the Pelicans happens to be a one Danny Ferry, consulting part time with the club since the ill-advised comments he made as part of the Atlanta Hawks front office cost him that gig. Could they be trying to test the waters to see if he's been functionally rehabilitated after a stint in NBA gulag?

Ferry has worked with the Pels in a part-time capacity as a consultant, but his most recent work as GM for the Atlanta Hawks was viewed league-wide as a clinic on how to reshape a roster and franchise without bottoming out into the lottery. https://t.co/QLdMayrqCI
— Adrian Wojnarowski (@wojespn) February 15, 2019


Given ESPN's Adrian Wojnarowski's comments about the man and his role in rebuilding the Hawks while announcing his interim naming, it seems that may indeed be the plan. Should the court of public opinion not frown upon this move, removal of the "interim" tag may come soon after, and, public relations nightmare potential and ethical concerns aside (not that it should be put aside, I'll let your own moral compass sort that one out), he certainly has the resume.

We ought to resolve ourselves to the possibility that Zarren, one of the Celtics' least-talked about but most-valuable employees may end up becoming a casualty of all of this tumult, and end up fighting the very interests he now represents - but it's also very possible not only is he not the best man (or woman) for the job...it may have already been taken.

Technically a GM position isn't open until Griff and Zarren have been linked to it.
— Jared Weiss (@JaredWeissNBA) February 15, 2019