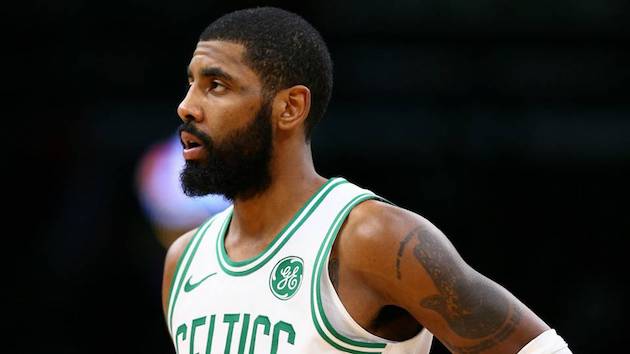 Things are heating up in Celtics locker room and Kyrie shows no signs of slowing down. We kind of got used to the idea that whenever Irving has an interview there will be things said, things that will go viral, become misinterpreted and eventually leave more questions than answers. However, in his recent interview with  ESPN’s Rachel Nichols  he seemed to realize a thing or two:

He claims that “media has broken up locker rooms. Like if you say something and it’s misinterpreted and instead of addressing it with a person or individual you read it on your phone [..] or somebody says it to you”.

Yes, that is exactly what happens, but it is more likely to occur if you say things that are controversial or have open-ended nature. So, by choosing your words carefully, this can result in an opposite effect and instead of causing a cataclysm you can actually pass a valuable message that is mighty hard to deliver otherwise:

“I initially didn’t play the minutes I wanted to play. I’m 26 years old heading into my prime, why do I have to wait for anybody?” he questioned. “Terry Rozier played in the Playoffs and did extremely well. Coming back that’s a natural competition me and him have. […] It is part of their growth when you have winning in your mind but you got to understand your teammates”.

Now that’s what I call a right attitude. Let your young core know that you realize what they are going through because you have been in their shoes before, but at the same time acknowledge the fact that you are highly competitive and will not shy away from the challenge. There is nothing wrong on doing that and if Terry Rozier puts himself in Kyrie shoes he probably realizes that as well.

“You don’t have to try to be a leader, you naturally propel yourself to this position, you naturally start listening to outside advice […] and at the end of the day I always had the tools now it is all about going out and doing it, and proving, and just being myself”, admitted the Celtics point-guard.

Things that come naturally are almost always a way to go for, especially when we are speaking about becoming a leader of a team that managed to get to the Playoffs Finals while you were on the sideline. It is understandable that we live in a western world where forcing things to happen is a natural thing to do but sometimes you have to change your approach, especially if you see that things do not work out as they are expected to.

Since apologizing to Lebron,  Kyrie seems to have become a different person or to put it in his own words: “That’s the best version of me”. In Pepsi commercials, Uncle Drew Pepsi was portrayed as a wise old man with a bag of flashy, head-spinning moves and a person around whom the team would unite. That is exactly what Celtics need right now and we all should hope that it will be the case because if it will, we will be able to witness a great Playoff run from Boston and who knows, maybe this year they will make that extra step that went missing during last year NBA Playoffs.