Kyrie wears a shirt with words on it, bad takes ensue


Sometimes, a cigar is just a cigar, as the apocryphal quote often attributed to Sigmund Freud attests, and when it comes to the shirt Kyrie Irving was wearing last night, I think that was indeed the case.

Sporting a New York Times t-shirt that read, "Truth: It’s more important than ever", many fans - of both the Boston Celtics and New York Knicks both - read that as some kind of coded message Mr. Irving is decamping to the Knickerbockers come summer. Or perhaps a Trump critic. Or Supporter. 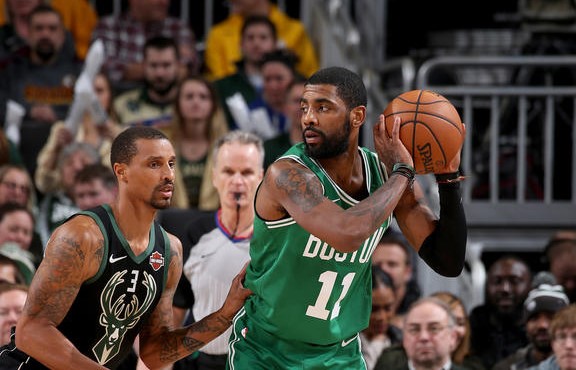 Generally speaking, I am not especially sympathetic to the travails of millionaires bemoaning their misfortunes of the attention which brought them their riches in the first place, and even less so when they continually throw gasoline on the media conflagration they claim to despise.

To that sort of situation, I have little interest, and will try to spend as little time on it as possible, as regular readers know I am not interested in spending more time than we have to on the issue. This does not mean I do not like Kyrie, for example, or that I am out on Anthony Davis in Boston.


But the best way for everyone in situations like this is to make up your mind when it feels right to you, and follow the path that presents itself  towards your goal while maintaining radio silence. "No comment" is an acceptable response to questions likely to stir pots in ways which help few, as is "speculation on this topic distracts from my current situation", or "I'm letting my representation do their job, mine is on the court".

Just because someone asks you a question doesn't mean that question merits an answer.

"You do it for the likes & clicks. Everybody does. Everybody wants to hear athletes talk about BS like this...it makes no sense. It's not real life."

Kyrie Irving was asked about the viral video of him & KD talking.


So, leave us, the fans and the media, to divine your intentions through real estate purchases and t-shirt choices, and ignore the almost-certainly-wrong results with an occasional laugh at the stupidity of some of the guesses. Focus on your long- and shorter-term goals in the cocoon of the moment, instead of burning bridges, creating spaces for unlikely or unexpected alliances.

For all we know, that shirt is just an homage to Paul Pierce, after all - or just what was at the top of the drawer.