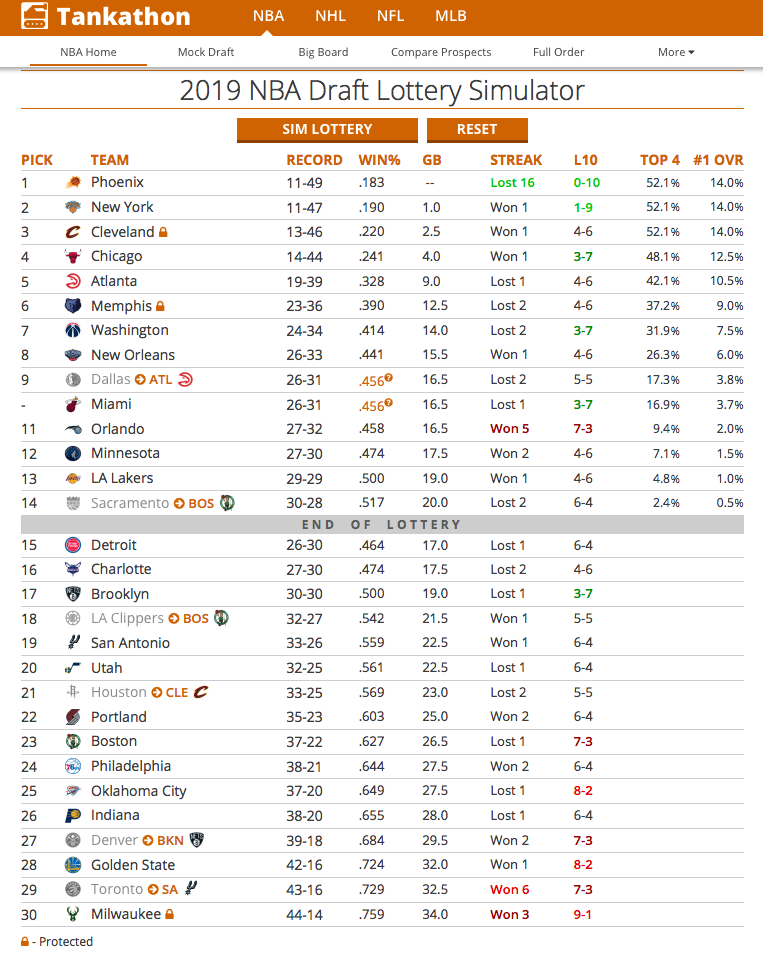 Let's look at the reverse standings as of today. The Suns would love to add Zion Williamson to pair with Ayton and Booker. They haven't won a game since the beginning of 2019. The Knicks desperately want a top pick, so they can either trade it for Anthony Davis, or convince Kyrie and Durant that the Knicks have at least one good player for them to play with.

Cleveland built their original contending team by getting the #1 pick and drafting LeBron. Then were able to get him back by winning the lottery 3 more times and using one pick to draft Irving and another to trade for Kevin Love (You get enough top picks and you can whiff on an Anthony Bennett. Or in Philly's case, you can whiff on an Okafor of you're drafting Simmons and Embiid with other top picks.). The Cavs are hoping to strike lottery gold once more. Zero desire to win. Hawks and Bulls would much prefer a better shot at a top pick then a few late season wins. The Bulls have previously gotten in trouble for resting healthy starters.


Memphis which is a rather clueless organization needs to lose to finish bottom 8, so they don't lose their pick to the Celtics. They desperately don't want to win games. They traded Marc Gasol for a non stretch center to help this happen. Washington is screwed now that their big money man John Wall is out for another year. Their only hope is to get a top pick to give Bradley Beal something else to work with otherwise he could be the next star to want out.

Pelicans are being forced to play Anthony Davis by the NBA, but have said they are going to drastically reduce Davis' and Holiday's minutes. They want a top pick to paid with he assets they receive in a summer Anthony Davis trade to jumpstart another rebuild.

Finally we get to a team that isn't tanking. Thats the Mavs. They have a young star in this past draft's #3 pick Doncic, but the reason they aren't tanking is because the Hawks own their pick. If you don't own your own pick, there's no reason to tank. Thats' why I suggested five years ago a draft system where no teams owned their own picks.  Can you imagine that? Fans could actually root for their teams to win every game? Crazy stuff huh?

After the Mavs, we get in the gray area of teams weighing the playoffs or tanking these final twenty games. The Lakers tanked for several years, but now have LeBron, so that's hard to do. But trust me if they look like they won't make the playoffs, LeBron will immediately be shut down. The Kings don't own their own pick, so have been trying to win every game this season. Again, a refreshing approach (Of course this sucks for Celtics fans as we own the pick). The Clippers are actually currently in the playoffs, but would prefer to not make it, so they keep their draft pick (Again the Celtics come into play as Boston receives the pick as long as it's not in the lottery).

There are a handful of other teams that are battling for the last playoff spots, but fans know that not making it and getting a better pick isn't too bad of a consolation prize to getting whooped in the first round by one of the elite top seeded teams. And the new lottery rules that start this draft actually make it more likely a team would tank to end up at the back of the lottery than making the playoffs.  Ever since the NBA made the 1st round a best of 7 as opposed to best of 5 to make more money, first round upsets are much rarer, so the decision becomes should we get beat in the 1st round so players who most likely won't be on the roster when we become contenders again get playoff experience or do we fall into the lottery and grab a 30% chance at a top 4 pick?

Of course one top pick does not guarantee your team's success. But not getting top picks makes it tremendously harder to join the elite teams. If you're a Knicks fan would you rather finish the season 10-10 and get a decent young player who probably won't become a star or lose almost all of them and draft Zion, Barrett, Reddish or Morant? And let's not discuss "winning culture." Almost all the players on tanking teams won't be on their roster when they become contenders. Think the Cavs players the season before LeBron or the 76ers players during the early Hinke years.

If you're fine with almost half the league trying to lose then no worries, thanks for reading this post and you probably hated it. Or if you're fine with your team being a mediocre, treadmill team stuck on the fringes of the playoffs and can't get out of the 1st round, then yes you're rooting for your team to win every game and that's awesome. It's just that you will probably never see your team win a championship. As a Celtics fan, I got spoiled winning championships. I remember hearing about how we don't hang conference champion banners. It was all about winning championships.

As long as the NBA doesn't incentivize winning and rewards losing, there will be tanking teams. And lots of them. The only workaround to still helping the less fortunate teams, but not encouraging losing as a quicker way to success is if every team owned another team's 1st round draft pick. You can read or re-read the (dated) proposal in the link below this post. I mean how fun was it for Celtics fans in recent years to be able to root for their own team AND also root for the Nets' opponents. To be able to root for your team to succeed, but to still have shots at top of the draft players like Jayson Tatum and Jaylen Brown.

The NBA and basketball is a better league and better sport than the NFL and football. But one thing football has on the NBA, is with maybe the exception of the final week of the regular season, fans of every team are rooting for their team to win that Sunday. Yes you can draft an Anthony Bennett #1 in the NBA, but thats also where you draft a LeBron James, a Kyrie Irving, or have the #1 pick to trade for an established star like Kevin Love. And as we head into March Madness, one of the beautiful things about college basketball is that their is no benefit to your team ever losing. You want your team to win every single game. Even if it's the final week of the season and you have a .250 winning percentage you're pulling for your team. Again there is no incentive to losing.

As long as losses are the key to adding a Zion Williamson, tanking will way too prevalent. The NBA will say it's not a big deal, but just look at the standings and ask yourself who's trying to win and who isn't? It's rather obvious. Anyway thanks for your time and listening to my annual rant on fixing tanking. If you think it's an issue, please read the link below and leave a comment. It's not a concern for the Celtics right now, but it has been before and will someday in the future, so still relevant.

My outside the box idea to fix the NBA draft