It wasn't just the fact that the Celtics lost to the Bucks last night, 98-97. Boston was without Gordon Hayward and Aron Baynes, but still came close to victory over a strong Bucks team. My point is that virtually all of the bench production came from Jaylen Brown, and he still only logged 23 minutes. 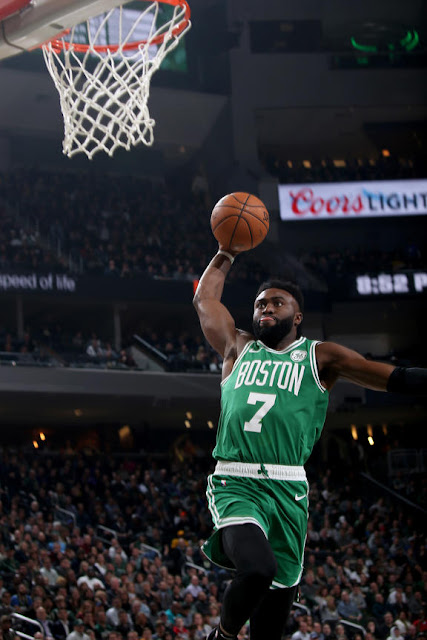 Jaylen scored 15 points on 6-of-9 from the field and 3-of-4 from beyond the arc - while adding five boards, three assists, one steal and one block. His four second-unit mates accounted for a combined six points on 3-of-12 on field goals and 0-of-5 on threes.

Despite the fine marksmanship, Brown was taken out at the 7:29 mark of the fourth quarter and never returned. Hindsight is always easy, but Brad Stevens often chooses to go away from the player with the hot hand. Beyond scoring, one other stat stands out from last night - Jaylen's three assists. That is one part of his game that needs improvement.

One other point. Brown has started to lose his hesitation on drives and jumpers. He has been doing well on catch-and-shoot situations, launching the ball without thinking about it. And he has learned to use that Reggie Lewis-like quick first step on drives. He had a solid game off the bench last night. Brad should consider additional floor time for him.