In the contemporary era of AAU basketball, it's not uncommon for players to have had long relationships with one another, going back years before they turn pro. 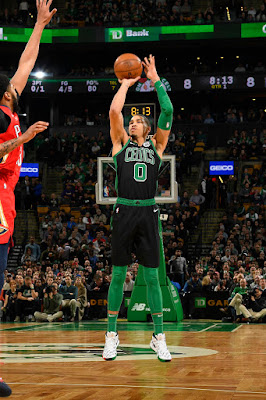 Such ties, however, are usually shared by players within a few years of each other, and form when the raw, future NBA players end up playing each other, or attending the same camps. It's far less common for players separated by a half-decade to have had such an opportunity, but Jayson Tatum's preternatural talent ended up piquing the attention of Anthony Davis.

Back in September of 2016, Tatum was preparing to begin his freshman (and only) season at Duke. Through an unusual coincidence, many New Orleans Pelicans were also in the area, with Jrue Holiday having temporarily relocated to the area so his wife could receive treatments for a benign tumor in her brain.

Several other members of the Pelicans organization joined Jrue in support, including Davis and several members of the Pels front office, borrowing practice space at Duke as a courtesy from the college so they could practice while there, separated from the Dookies by only the paint on the court.

Then, someone got the idea to work with Duke as part of an unofficial practice.

Anthony Davis on facing Jayson Tatum before Tatum had even played a college game: “When we left, I knew he was NBA ready. He did amazing things out there. He was going at us.” https://t.co/L3NEwDqYUd
— Adam Himmelsbach (@AdamHimmelsbach) February 25, 2019


Certain accommodations needed to happen to keep things NCAA legal (no, they didn't pay the players - let's not give those cretins too much credit), but after ironing out who could and could not be there in what capacity, young(er) Tatum found himself on the court with Davis, and even then he was holding his own.

"He immediately stood out ... He could do everything. You saw how he could shoot if someone at the next level was guarding him. He could make a play. He pretty much had all the talent and ability, so everybody pretty much knew he was going one-and-done."

"I don’t think anybody could really stop him. He was just scoring the way he wanted to score. He was at that level already, and he knew it. His athleticism and skill stood out among anybody there, and he was definitely one of the best players in the gym."


Currently in a bit of a slump -- perhaps triggered by the notion of being traded for the biggest star on that court on that fateful fall afternoon, AD -- Jayson may find himself playing for the team he practiced against by next September, but might also find Davis a teammate depending on what Danny Ainge and the Boston Celtics' ownership group managed to pull off in a trade for The Brow -- if they pull it off at all.


It's clear Boston values Tatum very highly, sophomore slump or no - and given that ownership group member Steve Pagliuca's son was a walk-on teammate at Duke, that assessment was probably cemented around the same time if not earlier. Said Pagliuca's son Nick of Jayson (per Himmelsbach):

"You couldn’t really tell [Tatum] apart from the pros. His game was so smooth. We get a lot of good freshmen at Duke, and just to see his game so NBA ready when he came in was still something different than what you’d usually see."


So speaketh the son, so thoughteth the father, methinks.

Like many of you, I am not entirely sold on dealing for Davis -- the devil, of course, mainly being in the details. What we might have to tender for a one-season rental could easily be a deal-killer for most of us, and hopefully Pagliuca the elder, Wyc Grousbeck, and Ainge as well, particularly if it requires Tatum's contract.

Do you see Jayson Tatum as the new face of the Pelicans franchise if the Anthony Davis trade goes down in the offseason? #Pelicans #DoItBig pic.twitter.com/mUdxUayUWU
— ClutchPoints (@ClutchPointsApp) February 12, 2019


But, hearing news of ties like these makes me think there's a better than good chance AD recalls just how good Taco Jay was then, and wants to see how good he can be in the future as his literal wing man. While he might not have any more control over this deal than Magic Johnson and Rob Pelinka did, getting word to Boston where the line in the sand needs to be to have a solid shot at re-signing isn't a minor thing.

And, after all, the man did say  (per Himmelsbach):

"He’s definitely going to be a star in this league for sure, a potential All-Star ... I think Boston got a good one in him. He’s only going to keep getting better, and the better he gets, the tougher it’s going to be on the opposing team."


So, AD, how about we get you two on the same team?