Could the Porzingis trade trigger a buyout candidate Boston might want?


The ink now dry on a deal sending them from the Dallas Mavericks to the league-worst New York Knicks, Deandre Jordan and Wesley Matthews are now being talked about as potential buyout candidates.

Naturally, one does not want to screw up a tank job when you're already doing so well (bad?), but this is the Knicks we're talking about. Hell, it's entirely possible the organization just traded away the best player they've drafted in decades because of bad signings and incompetence, leading us to this very article itself, so perhaps they will stay in the Big Apple; Deandre happens to be a good friend of Kevin Durant, who I am sure owner James Dolan has had daydreams about in a Knickerbocker uniform. 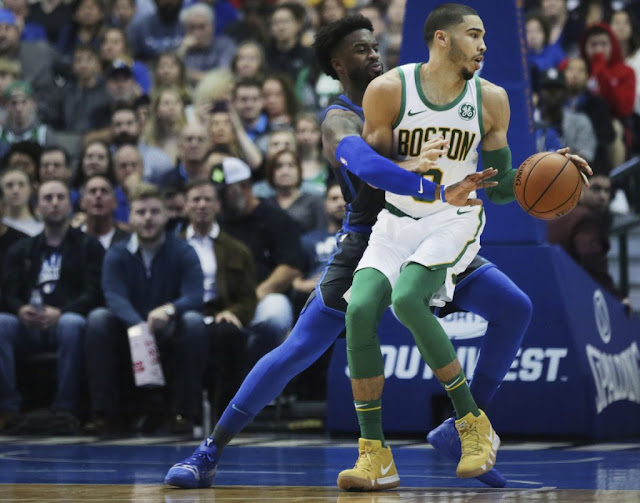 It's probably a dream, given Dolan's reputation, but the tank job is very real, and Matthews and Jordan will probably make it harder to stay in it if they aren't bought out - could either be of interest to the Boston Celtics?

I would circle DeAndre Jordan and Wes Matthews as two potential buyout players to keep an eye on. Players need to be waived by March 1 to become playoff eligible.
— Bobby Marks (@BobbyMarks42) January 31, 2019


Long-term, no. Neither is on the right side of the age curve of most of Boston's roster, and while both are probably earning a defensible if not small amount for how they can contribute to winning, neither are going to fall down to the range Boston would probably want them at to consider re-signing them.

There's issues of fit and minutes, too - the Cs already have to carve out enough high-level play to keep Gordon Hayward challenged enough to make real steps in his rehab, and adding a wing who does much of the same things as Hayward, Jayson Tatum and Jaylen Brown (who have had their own roles jostled this season) seems like a recipe for disaster.

Another thing to watch: while DeAndre Jordan also has a large expiring contract, and thus could be a buyout candidate, he's also good friends with Kevin Durant – whom the Knicks are hoping to land as a free agent this summer.
— Tim Bontemps (@TimBontemps) January 31, 2019


Deandre, however, is probably a better (if imperfect) fit, as something like a more polished Timelord, whose hyper-athleticism is n the decline, but also fouls, misses assignments, and turns the ball over much less than Robert Williams. Given Jordan's pay rate and career arc, one would think a shot at a contender who could give him more time (with Al Horford, Aron Baynes, Marcus Morris, Daniel Theis, Guerschon Yabusele, Williams and sometimes Hayward all looking for playing time, it should be scarce in Boston's frontcourt), but it's certainly possible Deandre wants a ring more than another big contract.

A third possibility actually has nothing to do with the Kristaps Porzingis trade that set this article in motion, as his discontent with the organization predates the player exchange - Enes Kanter. Kanter would face similar minutes issues, but given he's younger and perhaps more disposed to move from a situation with almost no playing time to one that may not be ideal but at least puts him on a contender with some playing time, the scenario becomes a little more plausible.

Enes Kanter plays for the first time in over a week, giving the Knicks logo a smooch before subbing in pic.twitter.com/rI1ExOASSX
— SNY (@SNYtv) January 31, 2019


Kanter's defense would make him unplayable next to Kyrie Irving on night's Kyrie's defense was anything less than his best (yes, Irving's improved, but most nights to a net-neutral defender), but could also be an excellent tool to deploy for beating the crap out of second units.

Excepting scenarios that sees roster consolidation for dodging the tax (unlikely, but possible), none of these players are currently looking at an open roster slot, but if the possibility of tax relief disappears with no moves at the deadline, Jabari Bird might find himself waived to make room for such a candidate. Players need to be waived by March 1st to be playoff eligible, and Bird's next trial is February 13th - something to keep an eye on.