Could the Celtics also be looking to deal for Kevin Durant?


This week is what is sometimes known as "silly season" in the NBA, and for good reason. 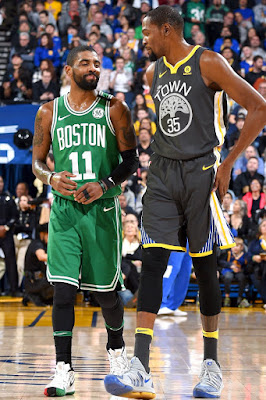 Given almost anyone reporting anything of note this week is getting information with an agenda, even those with sterling reputations for cautious, reserved analysis will find their intel under a microscope, and they ought to - if leaks were bonafide truths in this industry, Anthony Davis would have already played his first game as a Los Angeles Laker.

But, saying something is so does not make it so, and with that out of the way, I'd like to discuss a buried lede I've buried a bit myself that is quite pertinent to the above discussion and Boston Celtics fandom more generally:

Anthony Davis may not be the (only?) superstar Boston is after.

"A way to look at this would be that Boston's seemingly big plan of pairing Irving and Davis no longer seemed ambitious enough. LeBron and Davis in Los Angeles with a big chunk of cap space is a higher wattage spotlight. Durant, Irving, and Zion Williamson (or maybe even Davis) in New York is every columnist's dream. Maybe that's right, but not in the way the current conventional wisdom says. If we're in the era of true super teams, why do we assume that Boston would stop at "only" Irving and Davis? If Durant and Irving have a long-standing desire to play together, why would they settle for doing it with a skeleton crew of teammates in New York? League sources have told me that KD has expressed interest in joining the Celtics."


The emphasis above is mine, but it's not like it needed to be - the implications here could, if Danny Ainge and company manage to convert said interest into a reality, be league-transforming. And of course, I have interest in joining the Celtics on a five-year max contract, but in this case, we have evidence from Durant himself that this was at least once true, given the notorious meeting in the Hamptons before he joined the Golden State Warriors.

Given it was Danny himself that orchestrated a surgical offseason dance netting not just another Kevin (Garnett), but also sealed the deal with a sharp-shooting former Seattle Supersonic (in this case, Ray Allen) while obliterating a Laker-fueled narrative neither Garnett or his agent wanted anything to with the Cs. The details, would, of course, be about as fraught as it was last time around, requiring Durant to either force a sign-and-trade that would cost money and create cap management concerns, or to opt in to force the Warriors to accept whatever value they could get in return for his exit, most likely Gordon Hayward or Al Horford.

I reiterate, this is silly season, and "having interest" is worlds away from "playing for", but in a week of dispiriting narratives, some hints big things might just not be off the table, but actually could be bigger things is most welcome - to me at least.