A playoff team needs the guy that can pull the rabbit out of the hat when the game is on the line and a loss is likely. The 60's Celtics had a number of guys that could do that - John Havlicek, Sam Jones, Don Nelson. The 70's had Jo Jo White - the 80's relied on Larry Bird - and later, Paul Pierce was often that guy. The current crop of Celtics has Kyrie Irving in that role, and his magic act is tailor-made for the post season. 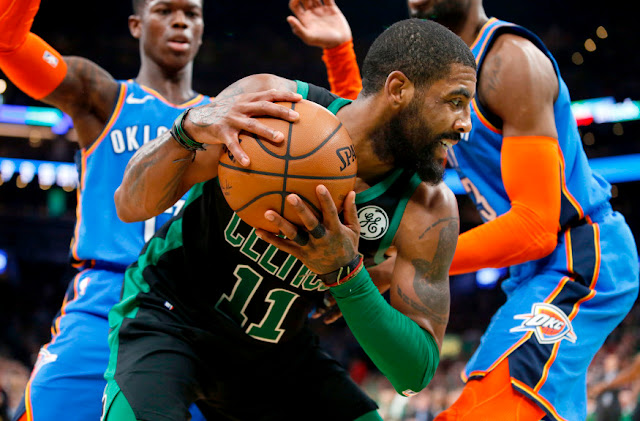 NBA teams may be calling the Celtics front office to test the waters on a trade for Irving, but there are no indications that Boston has the least bit of interest in doing that with two days to go to the trade deadline. Players like Kyrie don't grow on trees, green or otherwise (per Boston Herald's Steve Bulpett):

But more important than all that to the Celtics is the knowledge that many of the biggest playoff games are won by stars who can make a play when all the offensive and defensive schemes break down. Irving is one of those people who can make something out of nothing, and the Celts are not about to move him when his type is so hard to find — and while they still believe they are close to contending for a title this season.

“He’s amazing,” coach Brad Stevens said. “He’s an amazing player who can get his own shot and get shots for others. We’re really lucky to have a guy like that. He’s very unique.”

Irving's remarkable handles seem to free him from any defensive trap, and he always seems to get a decent shot off by quick and deceptive moves or by creating space for the jumper. And his passing skills have been on display for months. He is truly unique - and valuable. The Celtics are wise not to be seeking, or listening to, pre-trade-deadline offers on Irving. His magic act is already scheduled for playoff time, and he will be on the parquet stage.

Tom's Fit Tips: I frankly don't care which came first - the chicken or the egg, and I eat both. And I eat the whole egg. No egg whites, please. Granted, the whites are virtually all protein, but most of the nutrients are in the yolk. One whole egg is only about 80 calories. Eggs from pastured chickens are the healthiest. They get a lot of natural feed from plants and bugs. The yolks are high in omega-3 oils, in addition to the fat-soluble vitamins A, E and D. And the fat in the yolks is needed to absorb those fat-soluble vitamins. Additionally, egg whites don't fill me up (there is research on that). So eat the whole egg.