The Boston Celtics came up short in their comeback attempt against the Milwaukee Bucks on Thursday night and fell 98-97 to the Eastern Conference leaders. An ugly rock fight from the start, both teams struggled shooting the ball, but that didn't mean there wasn't some high drama in the final minutes. There are no moral victories for a team with title aspirations, but the Celtics have to feel good about how they matchup against the East's elites, even in defeat. 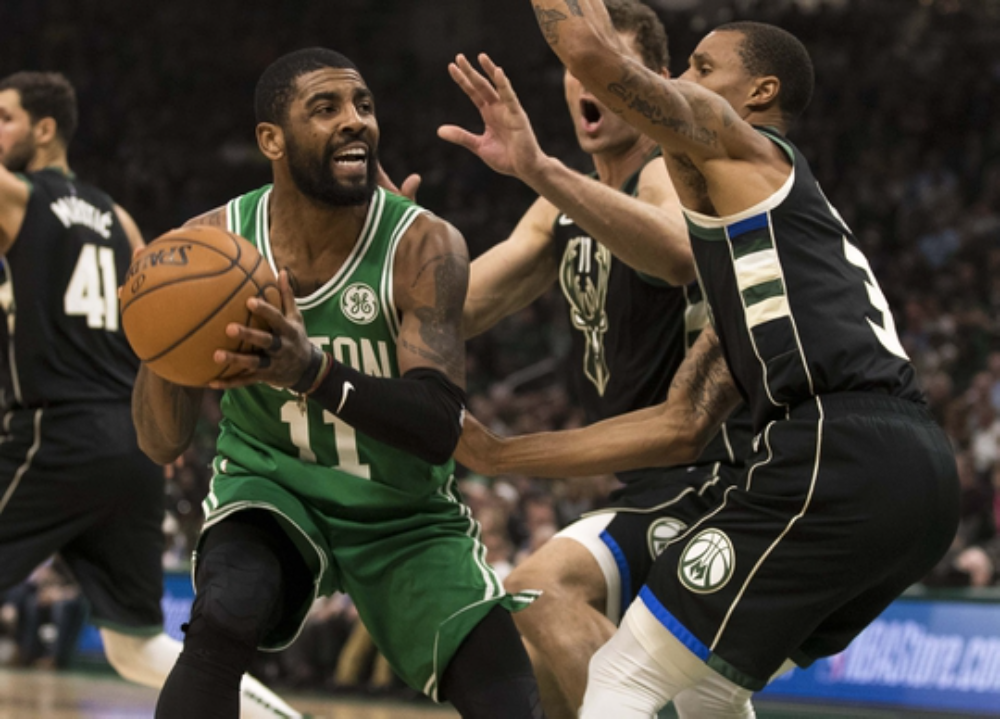 With the All-Star break in the rear view mirror, you could see the rust from both teams at the start of the game. Both teams combined to shoot 5-18 from the field in the first four minutes, and even stars like Kyrie Irving and Giannis Antetokounmpo were suffering. Kyrie started 0-4 from the field, while Giannis started the game with a loud dunk, but then missed a few close looks, including an alley-oop attempt, and took a hard fall after slipping in the lane on a drive.

One player seemingly unaffected by the extended rest period, and who continued his stretch of stellar play, was Al Horford. "Big Al" was huge on the glass in the first quarter, seven boards in the first six minutes, four of which were offensive, and added three points and two assists early on. A 10-0 Boston run opened up a quick 17-6 run, and along with Horford, the Celtics' defense had not weathered over the week off.

Celtics start off the post All-Star break with a 17-6 run, limiting Bucks to just 3-of-13 shooting so far.

Brook Lopez and Khris Middleton fueled a 14-6 Bucks run to end the first quarter, but the Celtics were able to get a few shots to fall from beyond the arc to carry a 22-20 lead into the second quarter. A big reason for the great start on the defensive end was Boston's ability to force turnovers. The Bucks had seven turnovers in the opening frame, three of them coming from Giannis after the Celtics clogged the lane.

Jaylen Brown, with the Hayward absence looming, made the most of his increased role in the first half. Seven points on 3-5 shooting gave the Boston bench a spark on an otherwise slow offensive night, and he also had two assists. Horford continued to dominate all across the floor while also giving Giannis some trouble on defense.

The #Celtics Al Horford continues to ball out against the best teams. His 3 highest scoring games this season came vs Toronto (24); Philly (23) and GSW (23). With 7-plus minutes in 2Q left vs #fearthedeer, Al has 10 pts and 8 rebounds in 13 minutes. pic.twitter.com/NeLCzJowR1

Back-to-back threes from Lopez, noted sharpshooter, and Tony Snell gave Milwaukee a 4-point lead, their largest of the game, with just over five minutes to play in the half. Boston got a few threes to drop from Brown and Marcus Morris, but went into halftime down 53-47 after giving up 33 points in the second quarter.

It wasn't clear whether or not it was the lingering knee sprain or having not played in almost two weeks, but Kyrie looked downright terrible in the first half. Not only did his production leave much to be desired (two points on 1-10 shooting, one assist), but his hustle and mindset seemed to be off. Multiple times he could be seen hanging his head after a missed shot and not showing the appropriate compete level on the defensive end. The C's were lucky to be down just six heading into the second half.

This is Kyrie's worst half of the year.

Much like the start of the first quarter, both teams couldn't take the lid off the rim to start the third. The Bucks and Celtics combined to shoot 3-16 from the floor to open the second half, and a majority of the looks weren't even close. After both teams, especially the Milwaukee, had gotten into a great groove in the second quarter, the third quarter came to a screeching halt, and reminded everyone that even professional basketball players can't make it look easy ALL the time.

After a Kyrie three tied the game 58-58, the Bucks went on a mini 6-0 run to regain a two-possession lead. Giannis came alive the third after a fairly pedestrian first half. The Greek Freak had seven points and two very loud dunks in just under nine minutes. That doesn't sound like a lot given Giannis' status, but based on how the offense was going in this game it was damn-near impossible.

In an ugly quarter that both teams would like to forget, the Celtics outscored the Bucks by two points (21-19) and closed the halftime gap to four points. Kyrie knocked down a few threes and showed some hustle on the defensive end/offensive glass, but to beat the East's best on the road Boston was going to need a lot more from him down the stretch.

Malcolm Brogdon, who always plays well against the C's, scored five points in the first 1:30 of the fourth quarter to help the Bucks open up an 8-point lead. With the Celtics struggling from the field, Milwaukee looked like they were going to make just enough shots to maintain the lead, but with just over five minutes to play, back-to-back threes from Jayson Tatum and Kyrie cut the deficit down to two.

Tatum and a rejuvenated Kyrie carried Boston down the stretch and gave them their first second half lead 90-89. After having just three points in the first half, Kyrie showed how the greats become truly great. Despite the late charge, the Celtics were still looking at a 3-point deficit with 1:07 to play. A high screen-and-roll and a nifty behind-the-back pass from Kyrie to Horford resulted in a three to tie the game 95-95, but Middleton answered back with a three of his own with 32 seconds to play. The Celtics went for a quick two from Kyrie to cut the lead to one, and Marcus Smart used his ninja magic to force a jump ball on Giannis that resulted in Boston getting the ball with 3.5 seconds to go and a chance to steal one on the road.

The Celtics were able to get the ball to Kyrie with the game on the line, but he missed a tough lefty floater with defenders hanging all over him. Boston didn't play well enough to get the win, but were still there at the end with the best team in the league.