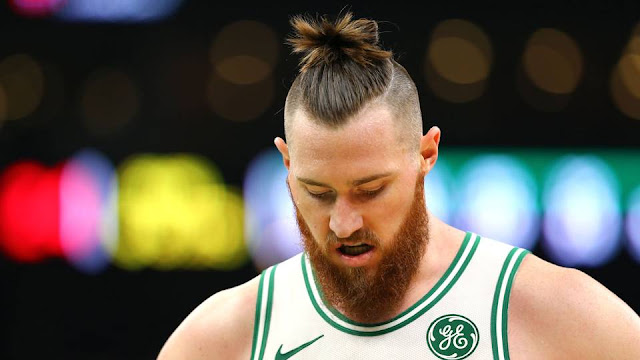 Boston Celtics big man from the land down under, Aron Baynes, has been sidelined since the beginning of the month with a left foot contusion. While he has been progressing, the original "few weeks" timetable still stands as the Celtics announced that Baynes will miss the Celtics upcoming road trip starting tonight in Milwaukee.

Per Head Coach Brad Stevens, Baynes is still "a ways" from returning to game action.

(Check out the first few seconds of this clip)


This continues to be a big loss (no pun intended). Numbers don't lie. (Shout out to Celtics radio play-by-play man Sean Grande for "filing this one away."

Just something to file away...

Baynes' absence will be felt even more on this upcoming road trip as two out of three games for the good guys in green will be against two of the Eastern Conference powerhouses -- tonight at the Bucks, and next Tuesday in the land of maple leafs in Toronto.

The Celtics are boxing out, fighting for playoff position with the likes of the Philadelphia 76ers, who have their own problems after news broke today that Joel Embiid is suffering from knee soreness and could miss some time. Boston is tied with Philly in the standings, but is one game behind the Indiana Pacers who impressively sit at the #3 spot post the season-ending loss of Victor Oladipo.

Hopefully Baynes will be available when the Celtics return back to the 617, as their schedule doesn't lighten up very much the rest of the way; after next Tuesday's matchup on the Raptors home floor, Boston will fly back to Boston for Western Conference rematches against Portland Trailblazers and Houston Rockets, ending the grueling schedule stretch by flying cross-country to battle the Golden State Warriors.

We know if it was up to Aron he'd duct tape his leg and be out there. It goes without saying that it's hopefully sooner than later. Not only for the joy of seeing him play, but for the sake of his defensive numbers, overall impact, and his ability to give teammates Al Horford and Daniel Theis some extra R&R on the bench.