The trade deadline has come and gone, and with Anthony Davis staying with the New Orleans Pelicans, the day was more or less a victory for the Boston Celtics, an avoidable loss to the Los Angeles Lakers later in the evening aside (it's nice you finally hit a game-winner in the Garden, Rondo, but couldn't it have been in green?).

But Boston didn't stand pat, exactly, on the deadline, making what might seem a most tiny move that could, in fact, have significant implications. Moving Jabari Bird to the Atlanta Hawks (who immediately waived him) opened up a roster spot for the Celts almost certainly planned to be used to add a player from the buyout market to bolster the roster for a playoff run, but also, perhaps, to use in an Anthony Davis deal this summer. 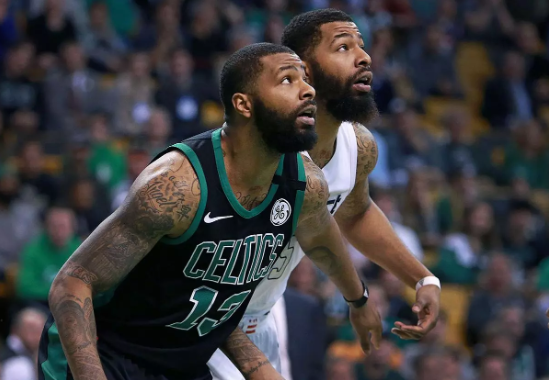 With the trade deadline passed, the Celtics have committed to being a taxpaying team this season, signaling their intention to use the roster slot to take on at minimum a player able to help the team this season, but almost certainly to help salary-match (and hopefully incentivize) a trade for The Brow.

This means, if it happens and is the right sort of player, that one or more guys you'd rather not see thrown into an AD package might have a shot at sticking with the team, though for now, it's impossible to project what New Orleans might want as a total offer. The Cs can offer as much as the full taxpayer Mid-Level Exception (MLE), about $5.3 million this season, for two seasons - just long enough to do the trick.

So, with that said, a look at what options are likely to be cut loose from their current situation (if they haven't been already) that also fit the bill of "useful to Boston this season", and maybe "useful to the Pels the next" is in order, so let's take a look:

Markieff Morris - the appeal here is pretty obvious on a lot of levels. Reuniting the Morris twins in green and white for a legitimate push for a chip would be sweet indeed, and while both brothers play the same positions (and well, I might add), they are pretty flexible, able to play the three, four, and even five for short periods. The biggest obstacle, however, is playing time, as Kieff would probably be better served for future contracts to seek more time and a bigger deal elsewhere. There might not be cap available for such a deal now in the league, but there will be this summer, and he'd need the freedom and playing time to earn such a deal back, so this one, while optimal for Boston, is a long-shot. He's also dealing with a neck injury that should keep him out several more weeks, lessening his opportunities with Boston or any club. It's hard to argue the Pelicans would want a guy they are currently waiving, but a lot of that has to do with agent-front office-player relations more than it does team needs - nobody wants a Morris brother pissed off he's on a tanking roster, after all.

Should the Celtics pursue Markieff Morris if he’s bought out? I would say yes. Am I saying that because I hope his quotes would be as good as Marcus’ quotes?


Jeremy Lin - Linsanity may be far behind us, but Jeremy has a lot left in the tank, and has shown he can excel in starting or reserve roles equally well, which would matter given Boston's guard depth is pretty flush, and Lin would likely see 10-15 minutes per game maximum. He can play the one or two, which would help him find time, but, like Markieff above, may want more time elsewhere in a search for one more large(ish) contract. There's also no guarantee he's released this season, though deadline moves by the Atlanta Hawks suggest that's in the cards, but could serve the Pels well as a rotation combo guard.


Wes Matthews - Early rumors suggested the Indiana Pacers as front-runners to pick up his services once he hits the buyout market, but the Philadelphia 76ers, Golden State Warriors, and Oklahoma City Thunder have also been linked to the wing. His skills could certainly fit into Boston's schema, but I think he picks the Pacers, Thunder or 76ers, where he could have a much larger role.

New team in the hunt for Wes Matthews if he secures a buyout from the Knicks: INDIANA. Philly, Golden State and OKC have been frequently mentioned for Matthews, but the Pacers clearly have a sizable void to fill after the All-Star guard Victor Oladipo's season-ending knee injury
— Marc Stein (@TheSteinLine) February 7, 2019


Enes Kanter - Rightfully lampooned for his terrible defense, Kanter would be a problem playing on the Cs' starting unit. Even if we did pick him up for the slot, though, that would never happen without considerable injuries, and Enes' rebounding and post play could be a massive boost to Boston's second unit, where he could be surrounded with plus-defenders in much the way Kyrie Irving (yes, I know he's improved massively, he's still the weakest link defensively among starters) is in the first unit. I could see the Pels having interest in Kanter, so long as the deal was small enough.

Report: Celtics interested in Enes Kanter if he is bought out https://t.co/v8koy8UCLW
— The Celtics Wire (@TheCelticsWire) February 7, 2019


Robin Lopez - RoLo would be another great option who has much of the same defensive profile of Aron Baynes (if worse), but more offensive tools near-basket. He doesn't space the floor at all, though, and while more consistent of a scorer than Aron, only just a little, and he may not end up being released by the Chicago Bulls this season, either. He might have value on a low, MLE-sized deal as a trade chip, though.

The Bulls and Robin Lopez are expected to engage soon in talks about a possible contract buyout, league sources tell @malika_andrews and me.
— Adrian Wojnarowski (@wojespn) February 7, 2019


Frank Kaminsky - Frank the Tank has plenty of faults (I don't know many other centers averaging under three boards per game), but he does shoot the three-ball well, and is young enough that he might also be attractive to New Orleans as a depth piece next season. He could legitimately aid Boston's rotation now, too, but may not be cut by the deadline, either.

The Hornets were not able to find a trade partner for Frank Kaminsky, source tells SN. He is expected to be a buyout candidate in Charlotte.
— Sean Deveney (@SeanDeveney) February 7, 2019


Wayne Ellington - Ellington's sharpshooting would help any contender in the league, and as he's starting to age, it's probably best for him to adapt to a role of limited minutes to preserve his longevity. He's my personal choice for both criteria, as his scoring and role would fit the Cs and Pels alike in this and next season respectively, with the MLE looking like exactly what he should be expecting as a paycheck at this point in his career.

A potential buyout target for the #Celtics could be former #Heat G Wayne Ellington, who was just traded to the Suns and is expected to be bought out. Ellington will have several suitors, however.
— gary washburn (@GwashburnGlobe) February 6, 2019


Dewayne Dedmon - The Celts could use some rim protection and rebounding in the second unit, and the MLE would be in the range of what he's already making, so there's at least some fit here. It's unclear how he'd feel about playing for the Pels next season, who will probably try and make the playoffs with the haul they extract from Boston - but are by no means guaranteed to in a more competitive west, and like Lin, may not be bought out, either.

Several teams have called on Hawks Dedmon, Lin, and Bazemore. Where do you guys think they will end up? pic.twitter.com/um92dlIgHN
— Hawks Talks (@hawks_talks) February 6, 2019


Pau Gasol - Much like his brother, Gasol's name has more cache than his remaining game does, but he's far from washed, too. His shooting, rebounding, and passing would be an excellent fit for the Celts rotation, with his age a good match for likely available minutes. It seems dubious at best the Pels would care much for a season beyond this one for Pau, though - and there's no guarantee he's waived, either.

Pau Gasol could be on the move, and it remains to be seen if he'll be traded before the deadline. 👀#GoSpursGo #Spurs pic.twitter.com/7z4eUmi7g8
— Spurs Nation (@SA_Spurs_Nation) February 6, 2019


Michael Beasley - Beas can go off on some nights, and has proven a loyal soldier over the years in whatever capacity he's called on. He could certainly help with spot scoring for Boston, and wouldn't need the full MLE, probably, to be convinced to sign with us.But he also has middling value at best as a trade asset, and would more than likely be more of a throw in from the Pels point of view.


Carmelo Anthony - This isn't happening, so I won't spend much time on it. He wouldn't fit unless he did something he hasn't yet (swallowed his pride and aged gracefully into a new role), and could be picked up in a big one by the Pelicans if they wanted him right now, so...


Marcin Gortat - The Polish Hammer is more like the Polish Ball Peen these days, and that's being generous. But that's the fault of father time, not Marcin, who can still give small minutes of quality pick-and-rolls and rebounding. Useful to Boston, but pretty much not at all to New Orleans.

Yahoo Sources: Marcin Gortat, who will be waived by Clippers, has interest in joining the Warriors but the defending champs plan to wait until the dust settles to get a clearer picture of what is available on the market.
— Chris Haynes (@ChrisBHaynes) February 7, 2019


Zach Randolph - Z-Bo could surprise us with some meaningful play left in the tank - it wouldn't be the first time he's been left for dead only to turn heads despite being close to what must be the end of his time in the league. I wouldn't rule out his utility on-court to a playoff team, but it's hard to see him having value in yet another season, which would be his eighteenth.

Dallas is expected to discuss forward Zach Randolph's future with him and his agent, Raymond Brothers. Randolph, 37, was never activated this season on the young Kings team. Randolph could become a free agent and look for a new team to sign him.
— Adrian Wojnarowski (@wojespn) February 7, 2019

Chandler Parsons on returning to Rockets: "I definitely would never count that option out. I have great memories there." (Via Channel 33)
— Clevis Murray (@ClevisMurray) March 7, 2016


More, surprise names may shake free before the March 1 deadline, but these are the most likely guys out there for now. Keep an eye out for more stories on any potential candidates in the meantime here on CelticsLife, and let us know who you'd like to see fill that open roster slot in the comments below.