Wlll Brad Stevens back off from small-ball and go with a Horford-Baynes combo?


This is a duo that won't work against every opponent - but Brad Stevens should use it more often. Al Horford is a skilled veteran, but he has trouble dealing with the bruising big men. Not so with Aron Baynes. There is nothing in this world more dangerous to a foe than somebody that has nothing to lose. Aron knows his limitations, but one of them is not backing down to any opponent - of any size - any skill level - or any thoughts of intimidation. 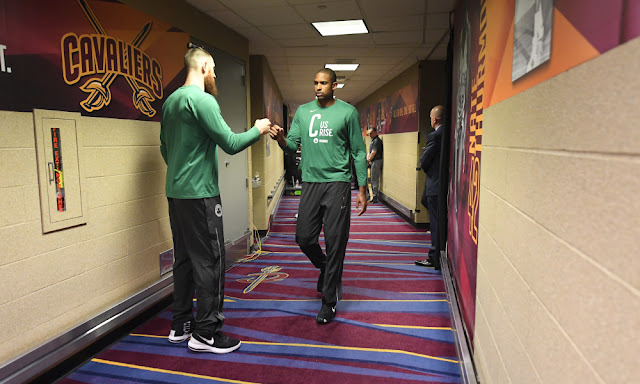 Brad Stevens says he's going to try to find ways to play Horford and Baynes together more moving forward now that Baynes is back.

Horford plays a finesse game. Not so with Baynes. Gregg Popovich kept Aron out of some practice sessions to prevent injuries to the Spurs players. Aron knows only one way to play. That is all out. In his absence with a hand injury, he was missed.

I often bring up the improbable Championship of the 2004 Detroit Pistons. Their center was Ben Wallace, graciously-listed at 6'9". He could not make a 3-pointer, and was not a good free thrown shooter. But he was tough and strong. He took on Shaquille O'Neal one-on-one in the Finals and took it away from Shaq. Ben scored in close, ripped down rebounds and defended his space.

That 2004 Pistons team lacked a superstar, but they had everything else, including Ben Wallace - who may have failed on any other team. But he succeeded on that one. It won't be the lineup you will see all the time, but it is one that will work often. Aron protecting the paint - rebounding - and even making the occasional 3-pointer. While Horford plays at the power forward spot, never excelling at any one thing - but doing everything to win games. We have seen that combo in the past. Worth a try!