Kyrie in play for captaincy in 3rd ASG voting returns; Tatum as a reserve 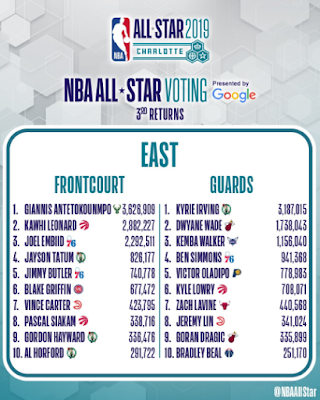 Kyrie Irving sits just 500,000-odd votes shy of first place in the East, trailing Milwaukee Bucks MVP candidate Giannis Antetokounmpo by a superable margin that might lead to a LeBron James - Irving team picking exercise, all the more compelling given this year the league has agreed to broadcast that new wrinkle.

While Gordon Hayward and Al Horford made the top ten vote-getters for East frontcourt, coming in at nine and ten respectively suggests it may be wiser for Boston fans to use their ten daily maximum votes on Irving and the second-highest Celtic vote-getter, Jayson Tatum, currently enjoying a slim margin over Philadelphia 76ers wing Jimmy Butler for the third slot in the East frontcourt.

So, for all you Boston fans, it may be time to shift focus to Jayson and Kyrie to ensure both make the team with the best position possible, and for any Bucks or 76ers fans reading this, take note that votes for Giannis and Jimmy count double today - but only on Twitter.*

Image: Twitter/NBA; video: Boston Celtics, Tomasz Kordylewski
Follow Justin at @justinquinnn
*If you still haven't heard the league no longer accepts votes for the ASG via Twitter & believed this line, I have a bridge in Brooklyn for sale, cheap!