Maximizing Terry Rozier's contributions might be hard - or very easy


We might not have a huge data set to work with this season, but it's not a mystery that Terry Rozier is better as a starter.

The Boston Celtics guard is something of a rhythm player, who needs a little extra burn to find his shot on a game-by-game basis, but when he gets it going, can be the kind of player who changes the momentum of a game, as he did versus the Minnesota Timberwolves last Wednesday after starting for an injured Kyrie Irving.

So far this season, two of three of Rozier's best games have come during starts, and eight of 16 total starts logged last regular season landed among Terry's top 20 outings points-wise. But it's not the status that matters for Terry - it's the burn, as can be seen when you look at his minutes versus production. 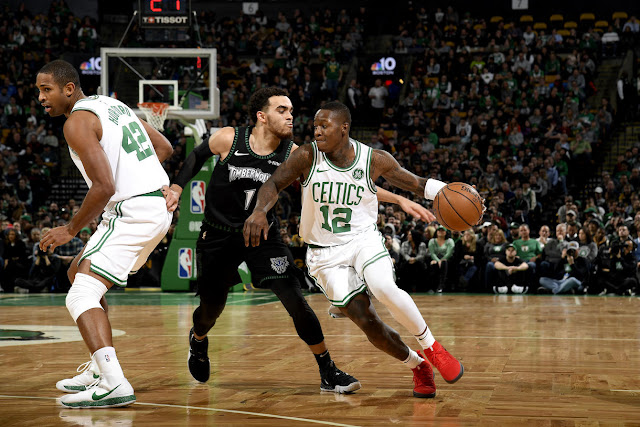 Firstly, let me dispel the "duh" factor; established players typically score more and play better on nights when they get more minutes...because they are playing well, keeping them on the floor (or there's no better option out there to turn to). While true, it's important to remember Rozier is not an established player, regardless of what the media hype bus was feeding us last April and May.

He might be ready to go out there and demonstrate he is, as an individual, but at least until his contract ends, he's got to navigate his current situation, one which the data shows may be mutually improved by getting the man more burn, even if it requires some creativity. That said, during last year's regular season, Terry had 21 games of about 30 minutes or more, during which he had only three games where he scored less than ten points.

Contrast this with the 20 games he played the least minutes, and you only get eight games where he scores above 10 points, and while the sample size is smaller this season, Rozier only has one game with more than ten points to his credit, while over his ten most-minutes-played games, has only two sub-ten point games. Checking last year's playoff run, three of his four single-digit scoring nights come over stretches where he plays less time (this run is not so useful, given he only played one game of 19 with less than 30 mpg).

You can argue that scoring alone does not make a player's night, but given Scary Terry is not known for being a distributor or lockdown defender, it's a major part of what is needed from him on this or any team, even if he does rebound at a high rate for a guard. However, with the league average of .459 from the floor this season as a general indicator of overall accuracy, you will note he's managed that rate or high in half his ten highest-minutes games this season compared to two among his ten lowest-minutes games.

Last season was less conclusive (he logged six outings at that rate or higher in his top-20 games in terms of minutes played, versus five among his 20 lowest-minutes games, but he also hadn't shown he could carry a team until the postseason, where three of his five above-league-average games were on the high end of his minutes-played nights), but the pattern is still evident - the man needs time to warm up.

So how to make that happen?


With Kyrie Irving out tonight after getting scratched in the eyes in San Antonio, this was a chance for Terry Rozier to get some extended playing time. And Rozier (11 points on 5/5 shooting in eight minutes) is taking advantage of it.
— Tim Bontemps (@TimBontemps) January 3, 2019

One option is to just start Rozier, easy enough while Irving is recuperating a scratched cornea, but this would require other moves to continue when Kyrie is healthy. Of Boston's best lineups in terms of net points per 100 possessions (given Terry's import as an offensive player), Rozier only makes it into one incarnation of the top-ten lineups, clocking in at fifth-best playing with Jaylen Brown, Marcus Smart, Jayson Tatum, and Daniel Theis.

One part of the reason this lineup has been effective should be obvious, given it's a second-unit lineup for the most part, and one that should torch most of the league's second units. But it also has a dedicated distributor (Smart) alongside someone willing to attack the cup (Brown) that would disappear if you plugged Terry into the most common starting lineup of late alongside Irving, meaning sending Smart back to the bench.

Given Marcus' recent contributions to the team's comparative success contrasted with a general lack of Rozier's, his last game aside, that seems unlikely. Marcus Morris Sr. could of course crash the paint in such a lineup if Brown remains on the bench (and he probably should until he strings together more solid performances), but that has been less a part of his game, his hot shooting from deep helping create the kind of offense Boston has needed to win.

There has been very little time spent with Rozier and Irving sharing the floor this season, and it's issues like this that point to why; while Gordon Hayward and Al Horford could help facilitate in such hypothetical lineups, it's unclear their lower level of skill in that regard would be enough to offset any issues that might arise from positioning two guards who play better with the ball in their hands, never mind the fact Hayward is only now showing flashes of the player he was before injury.

My proposal requires less experimentation, however, and I've made it before; more scheduled rest for starters, especially those dealing with minor injuries. Nearly half-done with the season, there's at least six teams Boston should be able to beat with its second string on any decent effort night, including the Washington Wizards, Atlanta Hawks, Chicago Bulls, New York Knicks, Cleveland Cavaliers, and Phoenix Suns.


Terry Rozier has started the 3 games Kyrie has missed.

The Cs play those teams a combined 8 more times, and should consider those games scheduled rest for Kyrie (including the season finale versus the Wiz April 9th) even though he'll have missed four games already counting tonight's, as the only significant argument out there might be that it'd hurt his odds to win Most Valuable Player, a contest he's already far enough back to be unlikely to win anyway.

What do you think? How should the Cs maximize the return on the remainder of Rozier's time in Boston? Could having his play remain erratic benefit the team longer-term when it comes to his next contract? Does the team have enough on its plate that such tinkering may do more harm than good? Let us know your thoughts in the comments below.