Marcus Smart did everything in last night's loss to the Heat except win the game. Marcus was one of the few that showed up in this second game of back-to-backs. 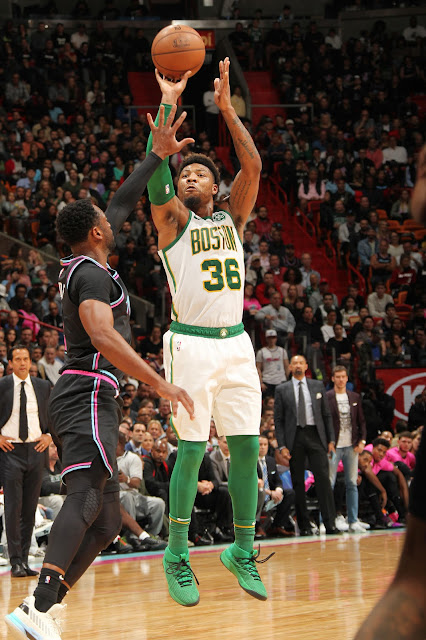 First of all, it was nice to see Marcus' new-found "Smarksmanship" did not suddenly depart. He notched 18 points on 5-of-10 from the field, 4-of-8 on threes and 4-of-5 on free throws. And with Boston trailing 46-72 in the third period, his Ninja move may have been the spark that ignited a 16-0 run by the Celtics.

Unfortunately, a spark wasn't sufficient for a team that just seemed to lack the fuel and energy to win this one. Smart only had one block in the game, but it was a beauty.

Much will be made of a brief confrontation between Marcus Morris and Jaylen Brown in the huddle. Jaylen was most likely frustrated at his limited floor time and production (13 minutes, two points on 1-of-5 shooting). What is fascinating in the video is how Smart can go from Ninja Warrior/shot blocker to calming presence in the storm. Remember, we are talking about the guy that had to be taken down by Jayson Tatum as Marcus was on a mission to destroy J. R. Smith.

You can see 7:12 on the clock. This was during a second-quarter stoppage. At 8:01 you can see Morris get visibly upset after Brown is late getting back on defense. Seems tempers flared at the next stoppage. https://t.co/GIwKshTWJy

The Morris-Brown confrontation is a very minor matter. Jaylen is easily frustrated, but sometimes needs some prodding to get out of his funk. Morris may have tried to do that. Smart has done that that in the past to Brown, but this time served as the calming influence.

One of our readers once wrote that Marcus Smart is the guy he would choose to walk with through a dark alley at night. I will go beyond that. Smart is the guy I would choose beside me if all went wrong in the world. I have watched Marcus as he improved his game, matured as an individual and fought through hardship. Danny Ainge loves the guy, and Red Auerbach would have adored him. That is enough for me!