Celtics take the L in Miami as the Heat even their record, 115-99 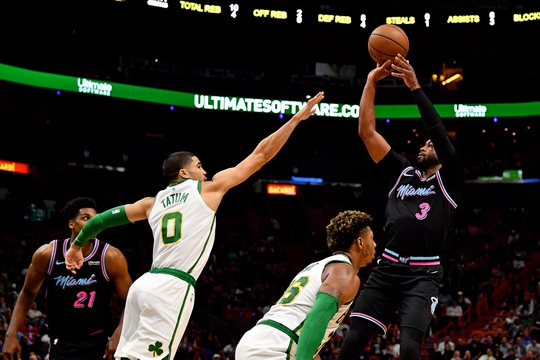 The Boston Celtics got scorched in Miami by some serious outside shooting as they lost to the Heat, 115-99. Dwyane Wade helped carry the scoring load for Miami as he scored 19 points on 8 of 12 shooting in 23 minutes on the floor. Josh Richardson scored 18 and Justice Winslow had a near triple-double with 13 points, 11 assists, and 7 rebounds. The Heat shot 46.2% from three as a team.

For the Celtics, Kyrie Irving had 22 points, 5 rebounds, and 5 assists, while Jayson Tatum and Marcus Morris scored 17 a piece. Marcus Smart continued his solid shooting as he scored 18 points on 5 of 10 shooting, 4 0f 8 from three.

The Celtics played a piss-poor 1st half, loaded with terrible defense and a whole heap of missed shots. Hassan Whiteside was a force early, particulalry on the glass as he nearly notched a double-double in the opening half alone with 8 points on 5 shots and 7 boards. Richardson and Winslow scored 10 points a piece before the break.

Irving and Morris were the only ones on the Celtics to move the needle in the scoring department early:

The teams traded buckets to start the 3rd quarter, but a 23-3 run midway through got the C's back within a reasonable reach heading into the 4th as they trailed by just 11 points, 83-72.

To go along with his good shooting night, we also got to witness this monstrous block from Smart on Bam Adebayo:

Although the Celtics were able to close the Heat lead to as little as 8 points, costly turnovers early in the 4th allowed Miami to cruise to victory, evening their record at 20-20 (good for the 7th seed in the Eastern Conference at this point).