Kyrie Irving is on a mission this season, and he will not be deterred. It is true that the things over which we have little control cause us the most stress. So if you can't control negative outcomes (read: loss to Miami Heat), then engage in some therapy to relieve stress - such as shooting hoops. 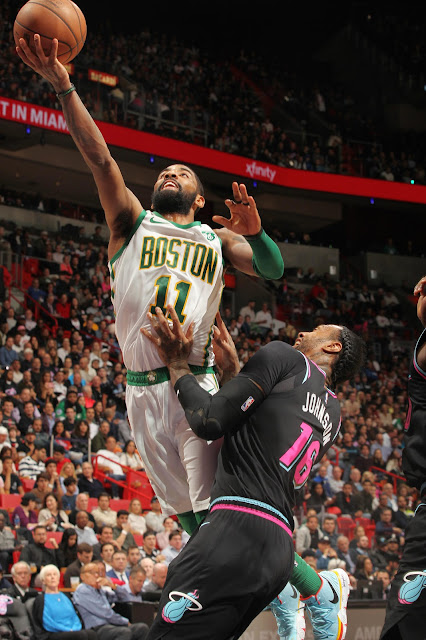 Kyrie Irving left the locker room as it opened to reporters after the game. He spent about a half-hour getting up shots on the Heat practice court and returned to address the media, calling the shot session “therapeutic” and saying it was better than a night out in Miami.
— Chris Forsberg (@ChrisForsberg_) January 11, 2019

Irving actually had a nice game in Boston's 115-99 loss to the Heat. He scored 22 points on 10-of-19 shooting, while adding five rebounds and five assists. But the loss in the second game of back-to-backs did not sit well with him. Kyrie's statement that the shooting session was "therapeutic" and better than a night out in Miami might give us insight into what he was thinking.

Kyrie Irving went back out to the court to get shots up and feel better about the #Celtics loss before talking to the media pic.twitter.com/e91C3w4sMe
— Josue Pavón (@Joe_Sway) January 11, 2019

I just wrote about a brief confrontation between Marcus Morris and Jaylen Brown, and Kyrie's statement "gotta be able to withstand plays and things that happen within a game" may allude to a play that initiated the confrontation (per NBCSports.com's Chris Forsberg):

Irving, still dressed in game shorts and a tank top as he addressed reporters an hour after the game’s completion, was answering a question when the lights in Boston’s locker room went out. Told he must have shot the lights out in his session, a laughing Irving said he was “above 90 percent up there, for sure.”

Irving said it was all part of responding to adversity and learning how to react when things don’t go well.

"It’s going to get harder, especially when you have that goal of getting that gold trophy,” said Irving. “It’s going to get tough and we gotta be able to withstand plays and things that happen within a game.”

Celtics coach Brad Stevens has repeatedly noted in recent days how he didn’t think his team handled adversity particularly well early in the year but they’ve started to show more resiliency lately, a hallmark of last year’s team that overcame injuries to Irving and Gordon Hayward to surge to the fringe of the NBA Finals. 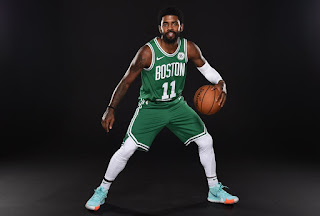 The photo to the right of Kyrie Irving's is that of my 6-year-old great grandson, Carson Thomas Lane. As a first-grader, he won't be eligible for the NBA draft until roughly 2032, but at his young age, he has already learned how to handle terrible adversity.

Kyrie had some messages to his teammates and kept them just cryptic enough to avoid controversy. One missed assignment, or one brief confrontation, should not disrupt the main goal - to win a Championship. There are a few good lessons from this one loss.