Marcus Smart fined $35k for altercation against Hawks, no suspension 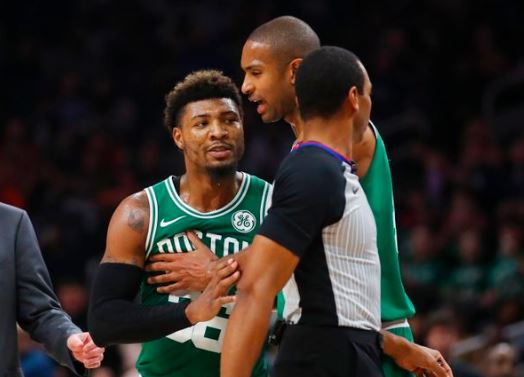 The Celtics take on the Miami Heat tonight at the TD Garden, and will do so with the services of their defensive leader, Marcus Smart.

The C's guard was ejected from Saturday's game in Atlanta after an altercation with DeAndre Bembry :

Marcus Smart and DeAndre' Bembry get chippy in the game. Smart gets ejected (@AAANe_MAnews) #AAANortheast pic.twitter.com/lqUSReOldI

This news comes as a bit of surprise since most fans and media figured Smart would be suspended after Saturday's incident.

The five-year veteran is having a career year from beyond the arc shooting at a 37 percent clip while averaging 7.9 points and four assists per game.

Rob Welch1/21/2019 12:48:00 PM
Share
Rob Welch
I have been a die hard Celtics fan since birth, even though I don't really want to talk about the ML Carr/Rick Pitino Eras but I will if necessary.
Newer
Older