Kyrie interested in reuniting with Lebron? So says the endless rumor mill 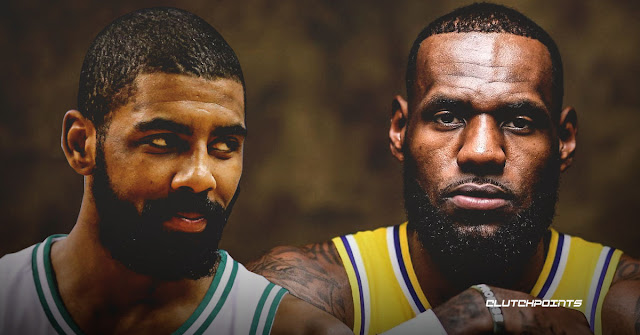 Check your watch, it’s rumor time. The latest being a supposed “real” desire that Boston Celtics superstar guard Kyrie Irving would be interested in reuniting with Lebron James.

According to Ric Bucher of Bleacher Report, a source close to the Celtics confirmed that Kyrie Irving is genuinely interested in reuniting with his former Cavaliers teammate. "That is for real," the source said.

Questions. So many questions. The first being: if this was such breaking news -- which is most definitely should/would be if it were true -- then why is this nothing but a footnote in this article? Why wouldn't Bucher be all over this, writing it as a massive Woj-like bomb drop of an article? Why's he spending all his time tweeting about the Super Bowl and not this? And who's this supposed source close to the Celtics? Source? Everyone with a Twitter account is a source nowadays. And what does close to the Celtics even mean? Overheard Danny Ainge talking while getting a soda at Chipotle?

Let's breath. While exhaling, let’s unpack this nonsensical piece of luggage, shall we?


PART I
After a roller coaster of a season, Kyrie called Lebron to apologize for being “that young player” who wanted to take over and do it on his own.

Lebron then went on Instagram and recorded himself singing a song called “Rewind” with a caption of “this is the joint” to Kyrie. Rewind? Does that mean he wants to reunite with Kyrie? I'm sure it does. Why wouldn't he? But it doesn't mean Kyrie wants to.

Regardless, larger alarms sound off.

Lebron knows he needs help to win. Every star does, but he knows that help isn't coming in the form of second-year guard Lonzo Ball. He also knows that he and his buddy, Klutch Sports’ big time agent and friend of Lebron, Rich Paul, control the NBA media and overall narrative.

Hang onto that thought.


PART II
A few things we know from Kyrie. Last Summer, in front of all of TD Garden -- and the world at large -- Kyrie said he "plans on re-signing" He couldn’t have said “I am going to re-sign” as that would be tampering.

He recently filmed a commercial with his dad, a man with Boston roots of his own dating back to his college days. In the commercial, Kyrie reiterates the fact he wants his #11 retired amongst other Celtics greats.

Amongst the Celtics, it's known there's a wink-wink that Kyrie will be offered the max the second he's eligibly on July 1st.

He's used the line "for years to come" repeatedly when talking about working with Stevens, playing with certain teammates, etc.

Would he really leave -- and to the Lakers of all teams? Just to have his accomplishments shadowed by the King's?


PART III
It's simple: Everyone and their mom knows the Celtics can make the Pelicans the best offer for Anthony Davis. They also know that Davis will be highly unlikely to re-sign in Boston if Kyrie Irving isn't there. So, why not poison the well and give Danny Ainge pause for cause -- potentially taking the likes of Jayson Tatum off the table, making Pelican's GM Dell Demps say he won't trade them to Boston?

Makes sense to me. Especially when you factor history in all this. Lakers' legend and current brass man Magic Johnson is under the gun here. He failed to deliver Paul George. Is seemingly going to do so with Kawhi Leonard too. He simply cannot afford to lose Anthony Davis -- and to the Celtics of all teams.

Lebron is currently hurt. Arguably the worst injury of his career, having missed close to 35% of the season.

Lebron wants to bring real, superstar talent to LA to team up with. He knows that superstars will be reluctant to join if there is concern about any injury that makes the invincible James look human.

There's massive pressure on the Lakers to deliver, especially after several abysmal seasons that led to acquiring the young assets they currently have. Magic also can't, as I mentioned before, lose AD to the Celtics. Again, massive pressure.


PART IV
Bottom line: it doesn’t add up. If this was legit, if this was real, why wouldn’t this actually be a topic of conversation as opposed to just side-eye-emoji retweets?

As an LA native, I spent time listening to ESPN 710 LA -- Lakers radio -- as the news broke. They spent about five seconds on it. Five seconds. Those dudes who would be drooling all over this topic.

Here's my take on Kyrie rumblings:
Any reporter who breaks "Kyrie wants to rejoin" LeBron has the only headline that can rival "Anthony Davis wants out," yet this report was dumped in the middle of a virtually unrelated story. Something doesn't add up.
— John Karalis 🇬🇷 (@RedsArmy_John) January 29, 2019


He's right. It doesn’t add up. What does add up is the likelihood that Lebron’s camp leaked this in hopes of taking Danny Ainge off speed dial.


FINAL THOUGHTS
1. The Celtics CANNOT trade for Anthony Davis right now, unless Kyrie is part of that deal. And if Danny Ainge has any inkling that Irving will leave, you better believe he wouldn't hesitate to ship him out.

2. Kyrie needs to come out and say something. Anything. If he shrugs it off then it's probably much ado about nothing. If he says he needs to address things in the Summer when they come, then the proverbial alarms will sound off.

3. Ric Bucher needs to also chime in and give more than alleged sources saying the word "real."


Until then, we need to all be (as Jules from Pulp Fiction said) like a bunch of little Fonzies. We need to be cool.

It just seems really off that when the guy himself has been nothing but consistent that wants to be in Boston, that now he wants to leave. He also doesn't seem like the type to quit when the going gets tough. Quite the opposite actually. Just breathe and relax.
— Keith Smith (@KeithSmithNBA) January 29, 2019

To steal another Pulp Fiction quote, "what do you make of all this?" Think Kyrie would leave for Lebron-land? Let us know in the comments below.