Kyrie calls Lebron, apologizes for "being that young player..."

Boston Celtics superstar guard Kyrie Irving wanted out of Cleveland and the shadow of the king’s crown because he wanted his own team. He wanted to be the maestro, the ring leader.

He got his wish. 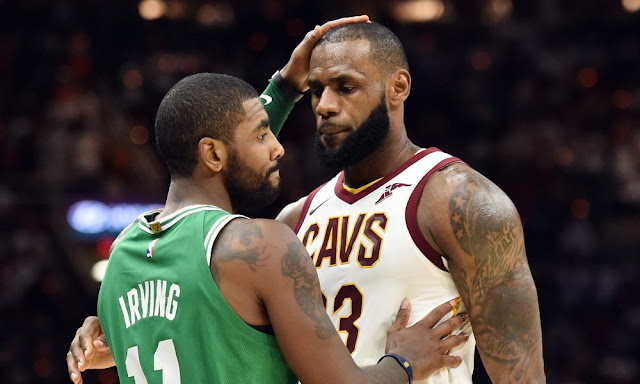 But, after a smooth sailing season that was only derailed due to injury, this season has been a whole new shade of green. It's darker and has seemed to lack the iconic four-leaf clover associated with this storied franchise.

Anyone following the Celtics this year painfully know that Kyrie’s leadership and patience have been tested during this tumultuous, Jekyll & Hyde roller coaster of a season. To the point that, after a horrid loss to Orlando a few nights ago in the Magic Kingdom, Kyrie Irving did the unexpected. He called Lebron James to utter two of the tougher words in the English language: I'm sorry.


Kyrie was unprompted in his post-game chat with the press, stating he told Lebron that he now understands the burden that were on his shoulders. Clearly, Irving sees a lot of his old self in young guys like Jaylen Brown and Terry Rozier III, both of which starred during the playoffs in Kyrie’s absence. But now that there are more mouths to feed than there is food in the pantry, the young guys are still trying to do it all; clearly, that's not working. Kyrie knows that. He sees it. Because, he was in Jaylen's/Terry's shoes as a Cavalier.


[LeBron] was one of those guys who came to Cleveland and tried to show us how to win a championship, and it was hard for him, and sometimes getting the most out of the group is not the easiest thing in the world. Going forward, I want to test these young guys, but I can’t be a bully like that. I want to get the best out of them, but I can’t do it personally like that. That was a learning experience for me of being in this position of really realizing the magnitude of my voice and what I really mean to these guys. I want to see them do well and do that where I empowered them. JB was right, I gotta do the right things and not point fingers at individuals.


Kyrie Irving is the leader of this team. We all knew that. But these comments, along with his actual call to Lebron, put the walk to the talk. Because fault recognition and having accountability for your actions are just some of what makes a captain a captain.

Life’s interesting, isn’t it? One day you’re a member of the Cavs, brushing off Lebron’s daily comments in practice and in-game because you think you know it all; the next day, the roles have flipped and you’re having the same conversation with the green and white newbies. Guess you do have to walk in a man’s shoes to truly feel what’s what.

For his entire tenure as a Celtic, Kyrie has been a leader on the floor. Last night, he proved he's one off the parquet as well.

What do you think of Kyrie calling Lebron? Do you think this was a sign of maturity and a (hopeful) turning point in the season for Boston? Let us know in the comments below.