The Boston Celtics spanked the Indiana Pacers 135-108 in a matchup of two of the elite Eastern Conference teams on Wednesday night. What was looked at as a premier January matchup between Eastern Conference power houses quickly turned into a blowout, and the Celtics flexed their muscles to the rest of the league in terms of what they can be at their best. 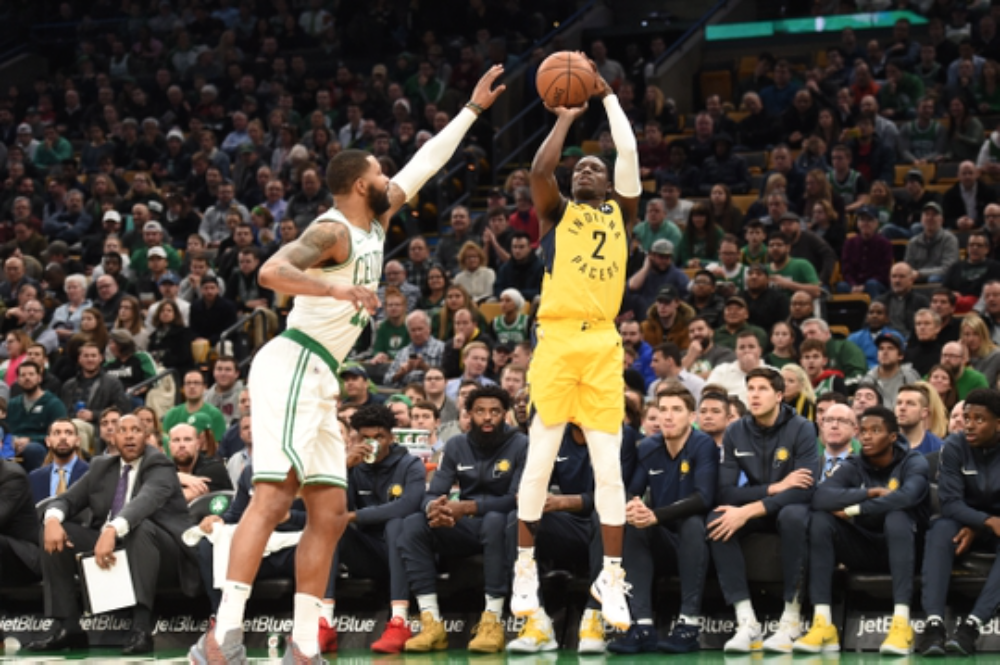 Marcus Morris and Jaylen Brown led all scorers with 22 points, and Jayson Tatum added 20 of his own. Much like against Brooklyn on Monday night, Boston got contributions up and down the roster, including 73 points from their bench. Domantas Sabonis led the Pacers with 20 points, seven rebounds and five assists. Victor Oladipo added 17 points.

The Celtics came out of the gate absolutely on fire, sparked by the shot making of Tatum and the defense of Marcus Smart. Tatum scored 11 of the teams first 18 points and was hitting from all areas of the floor. Smart was wreaking havoc on the Pacers on the defensive end, coming up with a steal and a block of Thaddeus Young in the first five minutes. Boston hit on 8-10 from the field to start the game and took an early double digit lead over Indiana.

After a flurry from the Celtics to open the game, the Pacers stormed back with a 13-7 run to cut the lead in half. After hitting eight of their first 10 shots, the C's knocked down just two of their next 12, and the red hot start had come back down to earth in a big way.

After setting a season high last game in assists, Boston assisted on just six of their 11 hoops in the first half. Not a bad number by any means, but the isolation scoring of Tatum certainly made that number dip. The Celtics are at their best when the ball in hopping, and to beat a tough defense like Indiana, they are going to need the passing game to be flowing.

Indiana opened the second quarter on a 12-6 run that eliminated the Boston lead and tied the game at 35. The Pacers got nine big points from Tyreke Evans off the bench, and the Celtics had a few slip ups on the defensive end that led to easy baskets. Tatum continued to attack the rim in a way that we haven't seen this season, and was finishing with all sorts of moves. Tatum scored 15 points in his first 13 minutes of play and was carrying the C's offense at times. Brown decided he liked what Tatum was doing on the offensive end and started attacking the rim with the second unit. In just 10 minutes Brown scored 13 points on 4-6 shooting and picked up right where Tatum left off. The young guys were out and running in transition and Boston was benefitting.

After doing most of their damage in the paint early on, the Celtics started to open things up from beyond the arc. Boston scored 24 of their first 41 points in the restricted area, but 12 of their next 27 points came from beyond the arc. The dribble penetration that created so many clean looks at the rim early had Indiana overcompensating, which left a number of shooters open as the game went on.

After the Pacers tied the game at 35, the Celtics went on a 33-18 run to close out the first half. The C's put up 68 points against the league's best defense, and had one of their more impressive halves of basketball all season in a primetime matchup.

This might be the prettiest half of basketball the Celtics have played all season.

Morris, who came on late in the first half, picked up right where he left off and scored the first five Boston points after the break. The Celtics pushed the lead all the way out to 20 early in the third, but the Pacers, a resilient, blue-collar team, worked the lead down to 14 with six minutes to play. Al Horford picked up his fourth foul early in the third, so Brad Stevens was forced to switch up his rotation a bit earlier than anticipated.

The Celtics were able to straighten themselves out with ball movement and some more intense defense, and pushed the lead back out to 20. After having eight players in double figures in their blowout win against the Nets on Monday, Boston had six players with at least 12 points by the end of the third quarter. You could say that the Pacers were tired on the second night of a back-to-back, but this Celtics team had turned the corner, and after leading 105-80 heading into the fourth quarter, had put the game away.

For the second game in a row the Celtics got a win with a complete team effort. This team has been trending in the right direction for the past month and has started to show how potent they can be when they figure things out. The Celts continued to pour it on throughout the fourth quarter, with the lead getting as large as 30 points. The whole fourth quarter was garbage time, and you could tell that Boston was feeling themselves a bit. The team soundly dominated a team that is above them in the standings, and the players and fans alike were pumped about it.

The Celtics will have a quick turn around when they jet off to Florida to take on the Miami Heat on Thursday night.