I have written several times that Marcus Smart's shooting accuracy from the field needed to be at least 40% for respectability in that portion of his game. Well, he has improved his "Smarksmanship" on field goals to 42.2% and he is hitting his threes at a 39.3% clip - at least for the past 20 games. As an aside, Boston has won 14 of those 20 contests. 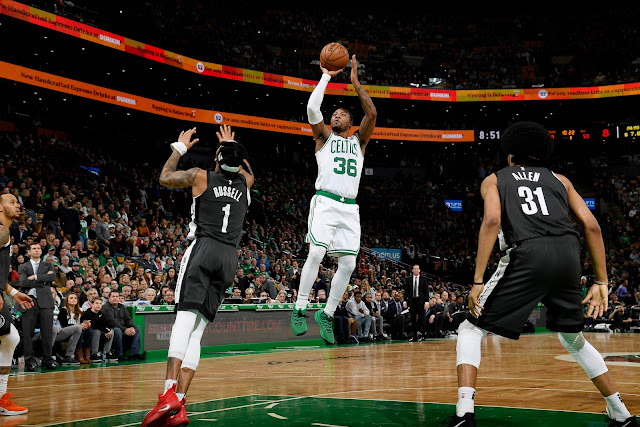 In last night's win over the Nets, Marcus had his usual line, including four rebounds, seven assists and two steals with only two turnovers and one foul. But what was not considered usual, if only looking at the start of the season, were the 12 points scored on 4-of-8 three-pointers (per MassLive's Tom Westerholm):

“The (Nets) bench was telling me they’ll live with and wanted me to keep shooting,” Smart said. "So I made sure they lived with it.”

In the past, an opponent talking trash might have goaded Smart into hoisting a damaging number of 3-pointers within Boston’s offense. But after a slow start, Smart’s shooting has taken a turn for the better. His 3-point totals are up to 34.7 percent overall, but in Boston’s last 20 games, Smart has hit 39.3 percent. His worst stretch of the season -- the first 10 games -- saw him shoot an abysmal 18.5 percent on 2.7 attempts, but ever since then, Smart has been comfortably above league average.

Marcus Smart talking shit to the entire Nets bench after every made three is my spirit animal pic.twitter.com/UchVs9MWfv

Will this Smarksmanship continue? Who knows. But 20 games is a decent sample to work from, and the 14-6 record, 42.2% FG%, 39.3% 3-point % and 4-of-8 threes last night are encouraging. Better shot selection and shooting accuracy were all Marcus needed to become a compete player. Long live Smarksmanship!