Aron Baynes may return as soon as next week


Aron Baynes may be a lot of things (by some accounts, all of Australia), but one thing the man is not is soft. 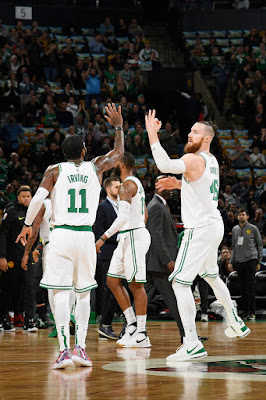 To the surprise of no one, Baynes is poised to return as soon as next week from an injury sustained the week before Christmas playing the Phoenix Suns, and injury people scoffed at reports he might return in a month to six weeks.

That injury, a broken hand damaged just moments into that game, would be precisely 28 days from the day it happened should Aron return for the January 16th matchup with the Toronto Raptors, no news to anyone familiar with the Aussie big man's approach to the game.

Aware to the fact something was very not-right with his hand, Baynes tried to stay in the game despite the obvious problem with it..

Soldiering on until a timeout was called that gave him a moment to reflect on the wisdom of playing with a likely fractured hand, All of Australia accepted the inevitable reluctantly. Said Aron (per the Worcester Telegram's Scott Souza):

"As soon as I did it, I knew it was broken ... I bent my fist and was like: ‘It’s not meant to bend there as well.’ ... Got up and down a few more times. Unfortunately, there was a timeout that was called, and that was the end of my run. ... Kyrie gave me (a high five) that I felt ... I didn’t realize it until I watched the clip again. I put my hand out, stupidly, with my left hand. He was a little bit pumped up at that time. Shouldn’t have done that one. Felt that."


After some time on the sidelines, Baynes is now effectively ready to practice with limits, so long as no negative effects of practice impact his recovery (per Souza):

"It’s headed in the right direction ... The plate is still not moving. That’s a good thing. I am cleared for everything but contact. ... It’s more so right now if I can do everything and still let the plate not move — the plate stays in place — then as long as it’s not going in a backwards direction, I’ll be good."


With Raptors big man Jonas Valanciunas likely to miss Aron's return due to his own hand injury, Boston may have a tool in their kit to make up lost ground to the now-second place Raps in the East.