The most consistently inconsistent team in the Eastern Conference and possibly the entire NBA faced off with the Miami Heat on Martin Luther King day, seeking revenge for half of their ill-fated Florida road trip a few weeks back. 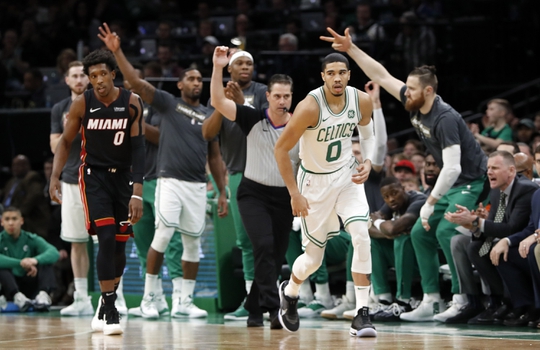 The Boston Celtics might not have won the tip or struck first (those honors fell to Hassan Whiteside and Josh Richardson, respectively), but soon jumped out to a ten-point lead behind Marcus Morris's early buckets, aided by Kyrie Irving, Al Horford, and Jayson Tatum, forcing an early timeout.

Miami came out of the time out hot, with Whiteside and Richardson scoring on back-to-back possessions, but Morris and Tatum capitalized on some sexy ball movement leading to a tip-in and trey, respectively. The Heat kept fighting their way out of their early hole, however, cutting the lead to just five with about as many minutes left in the frame on a James Johnson make from beyond the arc.

Both teams traded baskets for the next several possessions, the gap remaining roughly the same until Jaylen Brown and Terry Rozier checked into the game, with Gordon Hayward getting himself to the stripe along with Al and Kyrie pushing the lead up to 12 points. Derrick Jones Jr. would get himself to the line, converting both, however, to finish the first 33-23 Boston.


The second frame began with a Dwyane Wade make off a Tyler Johnson assist, with a Bam Adebayo hook shot that got the Heat back to within two possessions early in the quarter. Dion Waiters would cut the lead to just four with 10 left in the half, but Aron Baynes made his own trip to the charity strip, and quickly re-established the Cs' two-possession cushion.

Jones Jr. and Richardson cut the lead to just three with a layup and a trey on successive possessions after the former stole the ball from Tatum, forcing a Boston timeout, and a Whiteside oop and Derrick dunk erased Boston's lead entirely as they played some exceptionally ugly basketball.

The Heat took their first lead of the game for some time behind a Waiters drive, but it was short-lived, as Marcus Smart took it right back with a pull-up three that forced a Miami time out. Waiters and Irving traded treys of their own, with Dion tying the game up at 46 with two left in the half. Neither team was able to get separation in the time remaining, sending the clubs into halftime with the score still tied, now at 50.


The third quarter started with the Cs coming out blazing, with Jayson Tatum scoring four unanswered points out the gate, followed by an Irving layup and another Smart three. James Johnson finally got Miami on the board for the half with a trey at the 9:40 mark, putting Miami down 59-53.

Jayson would stay hot, and Horford began to warm up as well, pushing Boston's lead to seven with as many minutes left in the third, and Tatum, Morris and Irving helped push the lead to a game-high 15 with just under four remaining in the third.

Al kept cooking, logging another six in less than a minute of game play, and a Rozier trey pushed the lead to 21 with less than a minute left until the fourth. Waiters would score one more time before the third ended, putting Boston up 87-68 to finish the quarter.

The final frame began with Hayward joining the ranks of Cs making threes on the evening before Justise Winslow and Adebayo starting to chip away at the Celts' 22-point lead. Jones Jr. and Tyler Johnson would cut the lead to 92-79 before Jaylen stopped the bleeding, and a rare (lately) Aron Baynes mid-range jumper and an equally rare Semi Ojeleye three threatened to keep the game out of Miami's reach.


Winslow would get himself to the line on the next play, making both, and a quick two from Dion and three from Jones Jr. cut the lead to 99-90, with another trip to the stripe and jumper from Waiters going unanswered by Boston cut the lead to just five. Kyrie put Boston on his shoulders versus a lesser opponent yet again, scoring four quick points to give the Cs some breathing room.

Irving continued in his role as a one-man closer, facing only resistance from Adebayo and Waiters, but a pair of clutch free throws from Mook in the final minute effectively put the game out of reach, the Celts winning 107-99.

Boston next faces the Cleveland Cavaliers at home on Wednesday, January 23rd at 6:30 PM EST.