After the Boston Celtics flop, a jersey swap


Dwyane Wade is a first ballot hall-of-famer, I get it. 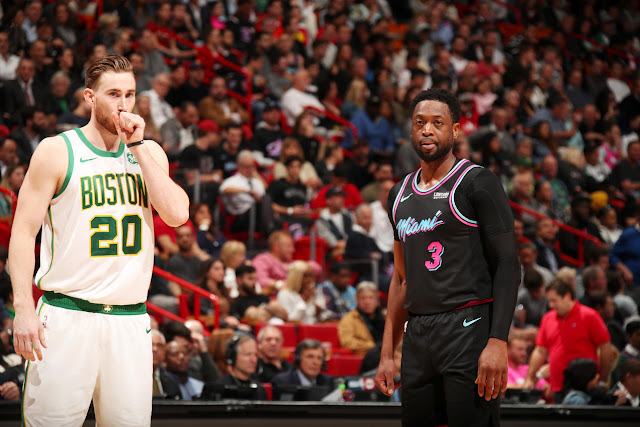 So forgive me if I am a little irked by the fact that team effort seemed lacking on a night I was able to foresee as a trap game on last week's CL Pod - and at least a little of that has to do with treating a back-to-back after a hard-fought win like a meet-and-greet with one of your idols.

.@DwyaneWade on his jersey swap w/ @T_Rozzay3: "He's somebody who watched me growing up & emulated my game. We've built a great relationship. I love the way he plays. He's a dog on the defensive end and offensively he's got so much. The kid's got a long way to go in this league." pic.twitter.com/6FsROdyEGz
— Taylor Snow (@taylorcsnow) January 11, 2019

Don't get me wrong, those "Vice" jerseys that the Miami Heat rock as alternates might just be the best alternates in the league right now, and, seeing as I hate him only for basketball reasons, it's totally fine to want to exchange jerseys with the dude. It's OK to be tired, or recovering from injury, too - but if you can't play, get out of the way and let someone else get some burn.

It just leaves a bad taste in my mouth the jersey swap came on the heels of such a meh effort.

The Boston Celtics are not about to be eliminated from postseason eligibility. The one seed is still in reach, albeit slipping further from their grasp with each avoidable loss like this one.

I'm not going to go old man yells at cloud and blame the loss on the atmosphere of collegiality with the opposing camp, as that's just the way of the modern NBA.

But, as much as I heart hose jerseys too, and haterespect Wade, I want to see the same kind of enthusiasm on both ends of the floor as I'm seeing for a guy who's legacy would have been better honored with the same kind of fierce competitiveness Dwyane still brings to a largely meaningless game. When it comes down to it, I get this was more or less a scheduled loss, but for some reason, it still rubs me the wrong way.

Did I mention those Vice jerseys are pretty sweet?