According to ESPN's Adrian Wojnarowski, The Evil Emperor, Rick Pitino, is being shipped overseas to coach Euroleague's Panathinaikos. This could be fun. Do the terms volatile and volcanic yield any clues why this won't work? .Pitino is telling folks he is no longer looking for the power and control that he has demanded in the past. I have some doubts on that one. He will be coaching for owner Dimitrios Giannakopoulos, who reportedly once threatened the lives of some referees and their families. Pitino won't only be taking on challenge of coaching in a new league and new country in the middle of a season, but he'll have to navigate an owner with a volatile reputation and history. https://t.co/syP1vaY22J
— Adrian Wojnarowski (@wojespn) December 20, 2018

Unless Rick has mellowed and shed some of his monstrous ego, this has a poor chance of success. Yes, I am biased since he came close to destroying my beloved Celtics while demeaning its founder, Red Auerbach. I have no use for the man, and I openly admit it. But he just won't go away. Did I mention his ego (per ESPN's Adrian Wojnarowski):

Pitino, 66, fired a year ago amid an FBI probe at Louisville, will travel to Athens shortly after Christmas to take over a talented, but underachieving, roster that includes several former NBA players, sources said.

The Athens team is expected to part ways with its coach Xavi Pascual to clear the way for Pitino, sources said.

Panathinaikos has started 6-7 in the EuroLeague, leaving the team in 10th place. The team's owner, Dimitrios Giannakopoulos, has a volcanic reputation in Europe. He was fined 150,000 euros in 2015 for barging into the referee's room and threatening to kill the officials and their families after a playoff victory over CSKA Moscow.

I needed more on Giannakopoulos and his rant towards the refs. Here is what ViceSports' Sean Newell wrote on the episode:

Dimitris Giannakopoulos is the owner of Greek basketball club Panathinaikos and recently earned his team a 150,000 Euro fine for straight up losing his mind on the referees after a Euroleague playoff game against CSKA Moscow. Giannakopoulos apparently burst into the referees locker room—after a win, no less—hurled a decorative candle at one of them and then unleashed a torrent of verbal abuse that would make Bryan Price blush. He threatened to kill the referees—we're working from least insane to most insane, by the way—kill their families, and alternatively, to fuck their mothers, wives and children.

Specifically, Giannakopoulos is quoted in the referees' report as saying "I'll kill you. You will not leave Greece tonight alive! I promise you this from my eyes." Which is just nuts; imagine someone promising you something from their eyes! He left after that, but came back and got even more insane. "I'll fuck your mother, your wife, your children in front of you!" Here, see for yourself: 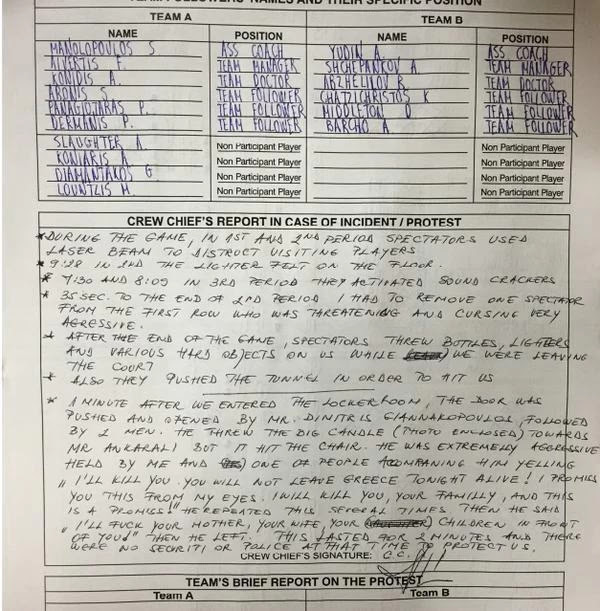 There you have it. Giannakopoulos supposedly did all this after a WIN. I hate to think what his actions might have been with a loss. If Rick wanted a challenge, he's got one. It better work!. If Pitino goes on a losing streak, it won't be Larry Bird walking through that locker room door - it will be a volcanic owner. Stay tuned.