This Celtics team is constructed to weather virtually any storm


This thought started during the playoffs last season. Kyrie Irving, Gordon Hayward and Daniel Theis were out of action with an assortment of injuries, and the backups went all the way to Game Seven of the Eastern Conference Finals. And taking the Pelicans out 113-100 recently with Kyrie Irving, Al Horford, Gordon Hayward and Aron Baynes all on the bench with various maladies solidified this thought - this team is so well- constructed, it seems to be able to weather virtually any negative issue. It is built like a steel-reinforced concrete bunker. 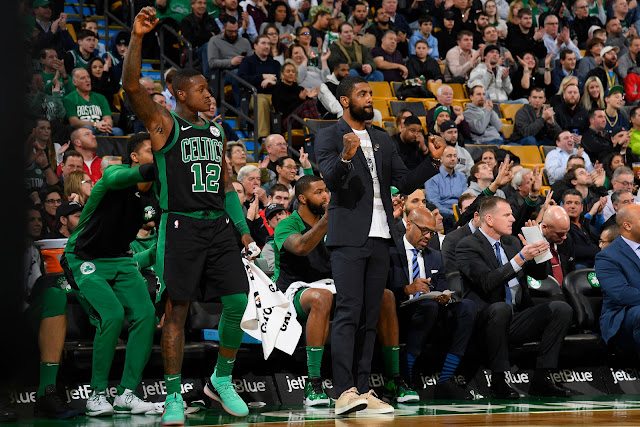 Against the Pelicans, Jayson Tatum at small forward notched 21 points and six boards. Marcus Morris was high-scorer with 31 points and is even passing the ball now (four assists). Terry Rozier at point guard had 10 points, seven rebounds and three assists. When Tery is turned loose, he thrives

Jaylen Brown off the bench managed 19 points, seven boards and three assists. Semi Ojeleye is finally starting to fill up the stat sheet and had 11 points and six rebounds. On the defensive end, I doubt opponents like to see him come into the game. Rob Williams got into the act with seven points, 11 rebounds and three beautiful blocks - two of them on Anthony Davis. He may be a regular rotation guy by the post-season - or sooner. And finally, end-of-the-bench Brad Wanamaker got into the game for 18 minutes and garnered four points, three rebounds and four assists.

Al Horford (knee) is being held out for a few games to let his sore knee heal up.

Aron Baynes (ankle) will go through shootaround to see if he can go tonight.

Yabu and Hayward out tonight.

Three All-Stars and a sometimes-starting center out with injuries, and the team cruises to a big win? Yes, I know - only one game - but as I watched it came to mind that this is now a team no other team wants to face. Rookie Rob Williams is just starting to emerge, and we haven't seen much of Wanamaker, but this team might go 14-deep. Injuries will happen, but Boston is equipped to handle them. It continues tonight with Al Horford expected to be out of action for a few games with a knee issue. Looks like more of Daniel Theis and Rob Williams. No problem. This team was constructed to handle this.