Avery Bradley and Isaiah Thomas honestly need a break. Since being traded from the Celtics, both have fallen on tough times. Isaiah, who signed a minimum contract with the Denver Nuggets is still out recovering from hip surgery, and has yet to play a game for them. Avery Bradley is seeing decent floor time with the Clippers, but he is not the player we knew when he was with Boston. 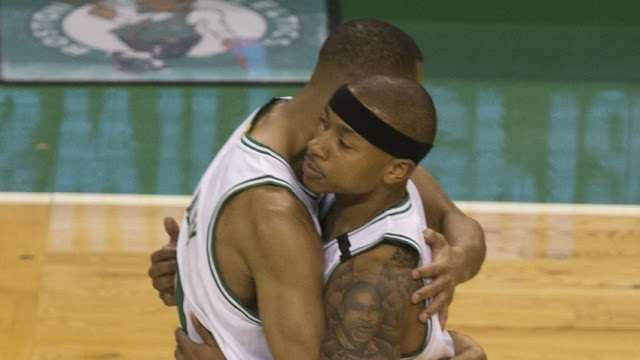 Avery Bradley tonight became just the 2nd player in the @bball_ref database to play at least 30 minutes and have no points, assists, steals or blocks and just a single rebound#clippers

Avery is averaging almost 30 MPG and notching 7.4 PPG, 2.3 RPG and 1.8 APG on 37% shooting from the field and 28% beyond the arc. His production is drastically down from his Celtics days. And his defense sometimes takes a hit (per ClipsNation's Sabreena Merchant):

Trending down:
Avery Bradley
Avery Bradley generally has the toughest defensive assignment on the perimeter, and he’s been put through the ringer this week. Bradley allowed Kyle Lowry to break out of his slump against the Clippers and had difficulty against the bigger DeMar DeRozan in San Antonio.

It seems highly-probable that Avery will see his minutes and starting position suffer in the near future. But Isaiah Thomas may be on the verge of returning, and his timing may be very good. Denver sits at the top of the Western Division standings with a 20-9 record. They have won three games in a row and are clicking. Thomas' return will certainly help their offensive game, and it would be great to see him have a productive season. Both players were traded by Danny Ainge in moves geared to improving the team. Those had to be tough decisions. Many Celtics fans were sickened by Thomas and Bradley being traded, but turnarounds from their misfortune would ease some of that pain.