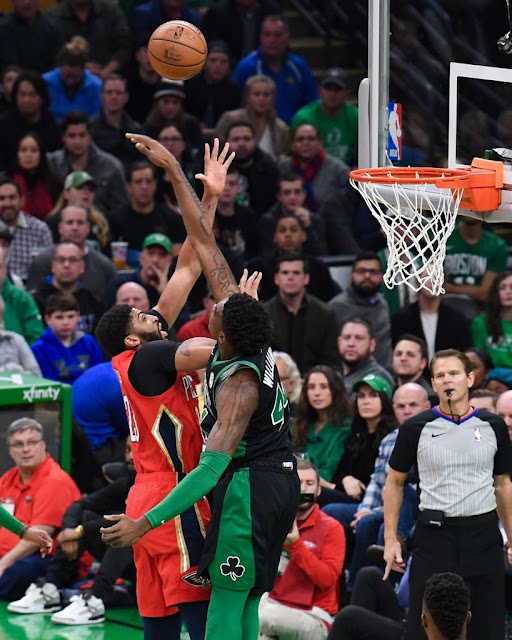 After last night's impressive victory at TD Garden, where the hampered Boston Celtics took down Anthony Davis and the New Orleans Pelicans with relative ease, the aforementioned superstar tipped his cap to one particular Celtic. No, it wasn't Jayson Tatum. Although, he had a couple stellar highlights for himself.


Jayson Tatum splits the defense and rises up for the jam in tonight's @JetBlue Play of the Game! pic.twitter.com/UWfKv9cERe
— Boston Celtics (@celtics) December 11, 2018


Instead, it was the rookie, Robert Williams. The big man -- AKA The Time Lord -- fresh off of Maine soil, stepped inside the ring with Goliath and held his own, coming up with several thank-you-again-for-drafting-this-kid-Danny-moments. Namely a couple of big time swats.

I thought he was going to go for the pump fake, and he didn't. I just tried to shoot over. he's good. he's talented. A good defensive player. I was surprised he got the first one.


It may seem like a subtle comment, but surprising a player of Davis' caliber is always something to write home about. Don't tell that to Coach though.

Never one to let his players get too high or too low, head Coach Brad Stevens took a playful jab at Robert Williams, staying "well, he held him to 41," referring to the 41 points Anthony Davis dropped on Boston in a losing effort. Stevens continued, stating Davis is "a hard guy to guard and Robert made it as tough as possible. That's all why experience is so valuable. Experience guarding really good players is really valuable."

Personally, I love Stevens' approach. Always have. While his comment about the "41" was in jest, there's truth in there. Williams, obviously, has a lot of work to do in order to carve his name in Celtics lore. This is the perfect way to keep the big man humble. The perfect way to keep him hungry. 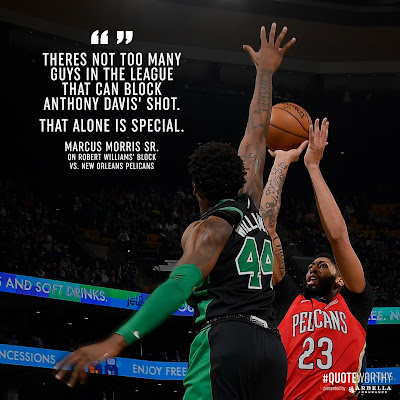 Special is right. While Williams is still rough around the edges, his athleticism and effort are off the charts. Every shot that goes up, Williams attempts to send into the ozone layer. Sure, he'll mistime a step. He'll get caught on a pump fake here and there. But he's definitely a sight for the sore eyes of Celtics fans who've waited decades for a rim-protecting big man.

Here's what he had to say after the game.

Hear from Robert Williams after a big showing from the rookie. pic.twitter.com/LtOKNB28qp
— Boston Celtics (@celtics) December 11, 2018


What do you think of Williams' performance last night? Do you think he bought Horford and Baynes some extra resting time on the pine? Let us know in the comments below.