Richard Jefferson: "On any given night, Kyrie Irving can be best player in NBA"


Richard Jefferson was a guest on FS1's First Things First and had some things to say about a 7-game series pitting the Celtics against the Toronto Raptors. He seemed to focus on Toronto's reliance on Kawhi Leonard, and to a lesser extent, Kyle Lowry for wins in such a series. Richard had this to say:

"Can you say Toronto can beat Boston if Kawhi Leonard has a 6-for-18 night?" he asked. "So you’re telling me that Kawhi is going to have to play great for four or five games to do that in a series against Boston, where anybody on Boston can have an off night and one of the other guys can go and have 25." 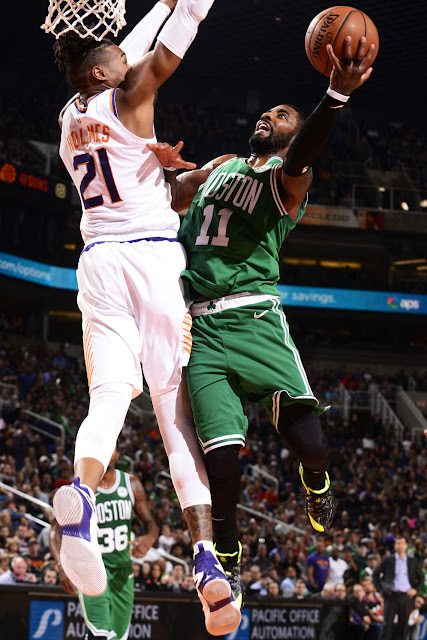 — Richard Jefferson on if Toronto has enough talent to beat Boston in a 7-game series pic.twitter.com/LFjcmaMONq

Maintaining his focus on Leonard, as seen in the above tweet, Jefferson indicated that Kyrie on any given night can not only be the best player on the floor. He can be the best in the NBA. Richard further emphasizes that Kawhi is a great player but not up to the level of Lebron James or Kevin Durant - players that can carry a team on their own. Nice point.

My Take! Both Leonard and Lowry are in the top-10 of most MVP rankings. Kyrie Irving is not. In a Toronto-Boston series, Kawhi may be the best player on the floor, but Kyrie steps in at 2nd place. After Lowry, Jefferson was right. Celtics have control of the next five spots. Richard mentioned Jayson Tatum, Jaylen Brown (nice to hear that), Al Horford, Terry Rozier and Gordon Hayward. Any, or several, of those guys can erupt for 25-30 points on a given night. Welcome back, Jaylen.